Back Off! Arizona Governor Warns NFL Not To Mess With His State’s Election Bills, Super Bowl 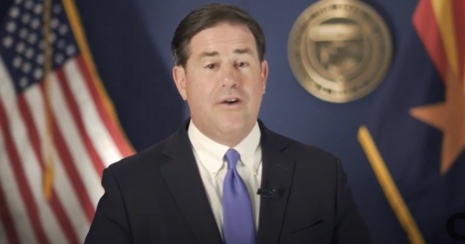 Calling all sports bullies to back off, Arizona’s governor says they shouldn’t even think about pulling a “Georgia” and blackmailing his state over voting legislation reform. Critics of pending state legislation on election integrity are already starting a drumbeat to remove major sports events from Arizona, just as Major League Baseball did in removing the All-Star Game from Atlanta.

Multiple election reform laws are being debated in the Arizona Legislature, potentially placing the state in the same crosshairs that subjected Georgia to hysterics about “voter suppression.” Gov. Doug Ducey, an Arizona Republican, said he will not be intimidated by any threats from the NFL to remove Super Bowl LVII (in 2023) from State Farm Stadium in Glendale.

NBC Pro Football Talk’s Mike Florio reports that the owner of the Arizona Cardinals, Mike Bidwill, is turning up the heat on Ducey. Thirty years ago, the NFL took a Super Bowl away from Arizona over the state’s balking on an MLK Day holiday declaration. In 2014, the NFL intimidated Republican Gov. Jan Brewer into vetoing a religious liberty bill so the state would not suffer the loss of a Super Bowl for the second time. Lying media and LGBT pressure groups distorted the bill as “anti-gay”, and the NFL got in line with them.

Bidwill signed onto a letter by the Greater Phoenix Leadership group calling Arizona legislation “‘solutions’ in search of a problem. They are attempts at voter suppression cloaked as reform — plain and simple. . . . Arizonans already have confidence in the integrity of our elections and, by and large, find it easy to vote.”

This assertion is flat-out bogus. Confidence in Arizona’s election integrity is actually very low. That’s why a court is allowing the GOP-controlled Arizona Senate to audit 2.1 million votes in Maricopa County, the state’s most populous county.

Gov. Ducey said, “I think Major League Baseball made a big mistake ... . I’d like to keep politics out of baseball. . . . I report to the people of Arizona, not a major sports league. And I’m going to make decisions on the policies that are put in front of me. And if good policy’s put in front of me, I’m going to enthusiastically sign it."

The three voting laws in play in the Grand Canyon State would require voters to go to the polls to cast votes if they haven't cast their absentee ballots in two consecutive elections. The number of days someone could obtain an early ballot would be reduced. Early voting would require an affidavit with a birth date or voter ID number.

According to Florio, the NFL “has given no indication that voting reforms in Arizona will jeopardize Super Bowl LVII. After dealing with strong criticism that arose from the national anthem controversy in 2016 and that has flashed from time to time since then, the league would surely prefer to keep its head low on matters of this nature.”

Nevertheless, the media likes to dangle these carrots in front of Big Sports. It worked for the Boston Globe and Los Angeles Times, both of whom last month demanded that baseball Commissioner Rob Manfred pull the plug on Atlanta. The city now stands to lose $100 million in revenue from seeing the MLB All-Star Game moved to Denver.

The Arizona Cardinals are clearly willing to use scare tactics to torpedo the pending legislation in their state. “Whether the NFL would do the same by repositioning the Super Bowl to be played in early 2023 remains to be seen,” Florio wrote.

The NCAA also has a very bad habit of sticking its nose into the politics of state legislation opposed by the radical Left. In 2016, it took postseason events away from North Carolina merely for protecting women and girls from predators in public restrooms.

Arizona is hosting the 2024 men’s Final Four and the 2026 women’s Final Four, and it could meet the same ridiculous fate that befell North Carolina. Ducey is term-limited out in 2022, and if he doesn’t bend a knee to the blackmailers now, his successor could do just that prior to NCAA and NFL events.