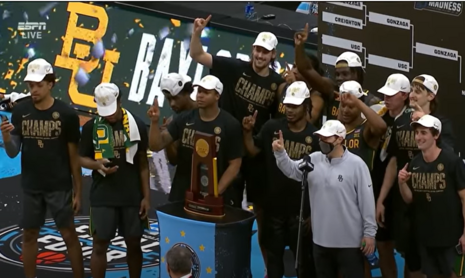 The ratings are in, and Monday’s NCAA men’s basketball championship game drew more than double the television audience of the last NBA Finals. Outkick blogger/Fox Sports Radio host Clay Travis today called it further repudiation of the NBA’s woke culture, and he said the league is destroying the sport popularized by previous generations.

Clay Travis said today on OutKick the Coverage, “It’s gotten so bad that viewers would rather watch a documentary reliving the glory days of Michael Jordan and the Bulls than watch the NBA Finals happening in real time.” He was referring to the 2020 ESPN documentary, The Last Dance.

Another startling fact, Travis pointed out, is that Gonzaga and Baylor are private schools without the huge national following of Duke and Kentucky. The game was a blow-out, and it still embarrassed the NBA’s television ratings.

“People like basketball,” Travis continued. “They crave it. They love the sport. The NBA — instead of giving them a reason to love it, instead of embracing the Jordan era — they are actually turning basketball fans away with all of their woke politics and their lecturing.”

Not only did the 2021 college championship game deliver a shellacking to the NBA this week, but as Travis pointed out, the current NBA social justice warriors are destroying the immense fan interest and good will created by previous generations of pro basketball players. Free of the social justice battering present in today’s NBA culture, the 1998 finals featuring Jordan’s Bull’s and the Utah Jazz attracted 37 million viewers.

Jordan refused to divide fans, as James does today. His fellow superstars “sold the idea that you should love basketball and should come watch them play it,” Travis said. Also, you could watch it in years past because the players and coaches stuck to basketball.

The current NBA culture is not about entertaining. It’s a whole different product now, and the NBA is trending in an “unsustainable direction — whether they realize it or not,” Travis remarked. “The new era of professional basketball is ruining everything the old era built.”

It's been said many times, and it’s so true: go woke, go broke.