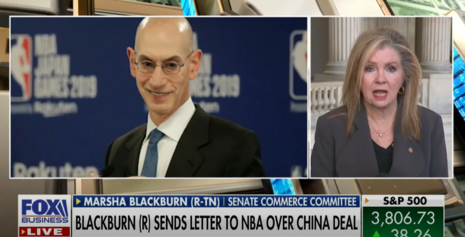 China Central Television (CCTV) was to resume airing NBA games on Sunday, according to Chinese media. Cathy He, writer for The Epoch Times, reported that previously the NBA famously “drew the wrath of the Chinese communist regime in late 2019 after then-Houston Rockets General Manager Daryl Morey tweeted in support of the pro-democracy protesters in Hong Kong. Chinese businesses cut ties with the league, and state broadcaster CCTV stopped airing games.”

Sports Illustrated’s Ross Dellinger’s writing indicated the NBA appears to be kissing up to China. He wrote the league “announced news of the return of CCTV, citing continuous goodwill expressed by the league toward China’s government.”

Dellinger said Blackburn, in her letter to NBA Commission Adam Silver, “wonders why the league would strike a deal with a television company that is at the mercy of Communist China, all while an investigation continues into China’s subversive acts as it relates to the origins of COVID-19.”

China will censor CCTV broadcasts seen as a threat to the Chinese Communist Party (CCP), Blackburn added and suggested the deal is a selfish maneuver that comes in the midst of reports that the country hoarded protective equipment, silenced doctors and lied about the risks of COVID-19.

The senator wanted answers from the NBA, and she wants them by March 30. Dellinger’s report said she wants to know:

“(1) the details on the new contract with CCTV and what the NBA must ‘adhere to’ as part of the contractual negotiations, especially as it relates to sensitive topics such as Hong Kong and the Xinjiang region; (2) requests the financial impact of CCTV’s ban on airing NBA games; and (3) asks about the role in the new deal of China’s Chief Executive Officer Michael Ma, whose father is a top executive at CCTV.”

Does the NBA’s “goodwill’ also include the $1 million in medical supplies the league previously sent to the CCP?” Blackburn asked. She calls this “deeply troubling” because China dominates the Personal Protective Equipment world market and it has committed “grave human rights violations.”

Blackburn (seen in Fox News interview above) cited a New York Times investigation into companies affiliated with China that use forced labor by Uyghurs to produce protective equipment.

Blackburn’s letter and past criticism of the NBA by the Tennessee senator and Senator  Marco Rubio (R-FL) are considered “blistering communication,” by Dellinger. As opposed to the NBA holding the evil Chinese regime accountable.

The timing of the NBA’s sucking up to China to restore the televising of its games in exchange for broadcasting revenue is also suspect. During Sunday’s TNT broadcast of the NBA all-star game, an inflammatory and partisan political video was featured. Narrated by LeBron James, the video decried “voter suppression” and white supremacy while featuring only peaceful Black Lives Matter protests.

The NBA’s optics in the U.S. and China are looking awfully bad to say the least.