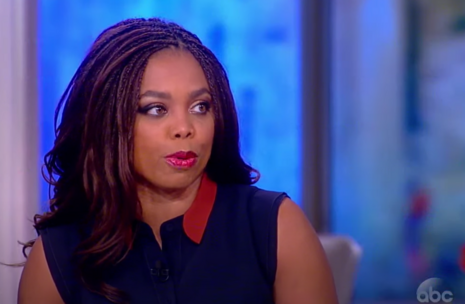 The NBA’s decision last week requiring the playing of the national anthem at its games is being met with loud, angry opposition from liberal media. Jemele Hill, bombastic writer for The Atlantic, yells from the Left that patriotic symbols are being “weaponized” to diminish the humanity of minorities. She wrote Sunday urging pro sports leagues to discontinue featuring the Star-Spangled Banner.

Hill’s diatribe was prompted by last week’s news that the NBA’s Dallas Mavericks had not played the anthem all season. NBA Commissioner Adam Silver reacted quickly to the ensuing national backlash and informed all of the league’s teams to honor America by playing the anthem.

One of the foremost detectors of “white supremacy” in the United States, Hill (seen in photo from past appearance on The View) ranted the Mavericks should have held their ground “because playing the anthem shouldn’t be a pregame ritual in American sports. Not during a time when many people—including many athletes of color—are deeply uncomfortable with how patriotic symbols have been weaponized to undermine and diminish the humanity of Black and brown Americans.”

Hill further stated that the voices of those who are not represented by the anthem have not been heard. It isn’t clear what universe she is living in because those angry voices of protest have been frequently heard ever since Colin Kaepernick started spewing anti-American hate in the summer of 2016. Violent, destructive Black Lives Matter protesters have been seen burning and pillaging cities across the land.

Former President Donald Trump and conservatives hijacked the conversation and branded anthem protesters as “traitors,” Hill said. “Instead of forcing Cuban’s team to back down, the NBA as a whole should revisit its anthem rule. Other leagues should do the same. The ritual enforces a rote, narrow idea of patriotism—one that pro sports should be working to change, not uphold.”

Hill took her radicalism further by writing that Trump and many Republicans who impugned Kaepernick’s patriotism now want the rest of the country to ignore the Capitol riot and move on. People of color should now feel uncomfortable with the conservative definition of patriotism.

Back to the NBA, its strong-arming of teams to honor America via the national anthem doesn’t feel right to Hill, “amid the renewed attention to forms of racial injustice ingrained in American life … .”

Especially, Hill wrote, since Texas Lieutenant Governor Dan Patrick announced Wednesday that he plans to introduce the “Star Spangled Banner Protection Act.” This act would require the national anthem to be played at all events that receive public funding in the Lone Star State. Patrick called the Mavericks’ previous refusal to play the anthem “a slap in the face to every American” and “an embarrassment to Texas.”

Commissioner Silver should have taken advantage of the fact that Dallas had not been featuring the national anthem and done away with it league wide once and for all, Hill suggested. She also said someone would be angry no matter what the NBA did with the anthem, “But mandatory patriotism doesn’t give Americans reason for pride; it only highlights the country’s failures.”

Despite all of the nation’s so-called failures, large caravans of foreigners are frequently gathering to march this way.