The topic of transgenders in sports is ablaze this week with numerous parties weighing in on the controversy. Fox Sports talk show host Marcellus Wiley called for a separate division for transgender athletes, and he drew a sharp rebuke from SBNation Outsports, which wants the floodgates opened wide for transgenders in women's sports.

Wiley (appearing in above photo) is a former NFL Pro-Bowler (2001) and the co-host of “Speak For Yourself” on Fox Sports TV, along with Emmanuel Acho. In response to President Joe Biden’s executive order “Preventing and Combating Discrimination on the Basis of Gender Identity or Sexual Orientation”, Wiley called for a separate division for trans athletes. The former NFL player Tweeted: 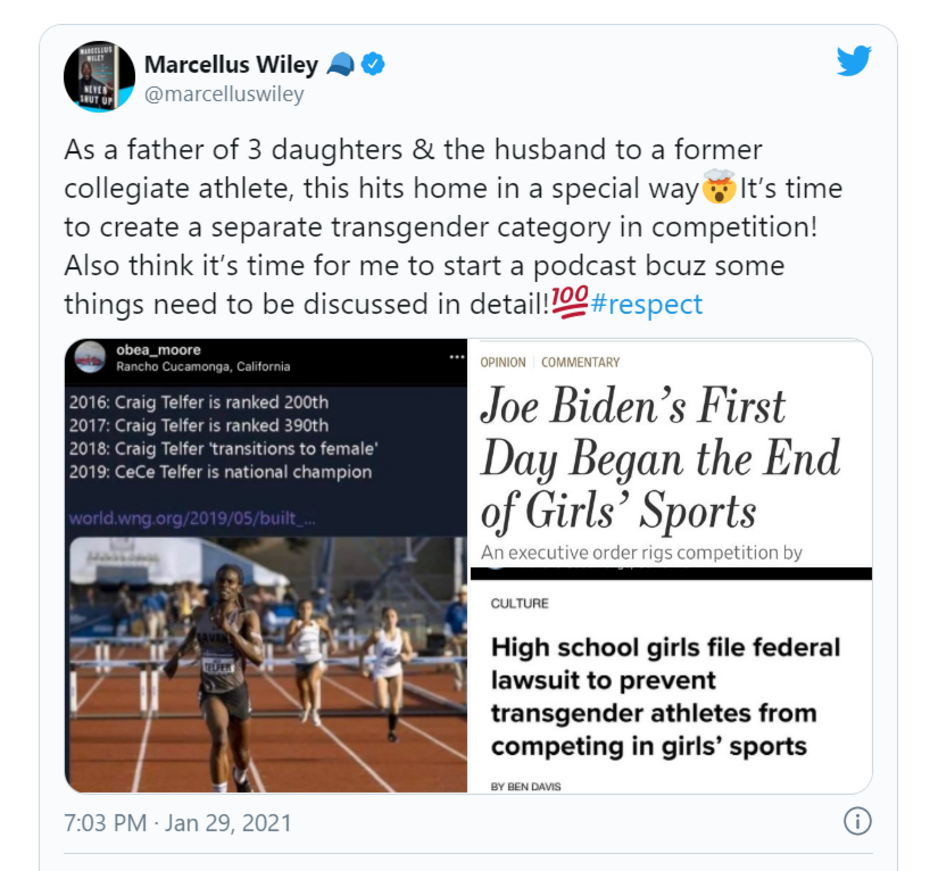 “(1) continue to be obligated to provide males and females with equal sporting opportunities on the basis of biological sex, and

“(2) be newly obligated to provide ways to include trans girls/women in girls’/women’s sports that ensure competitive fairness and playing-safety without diminishing the protection of biological females.”

Good luck with ensuring such "fairness"!

The working group’s ridiculous statement portends to protect the integrity of girls’ sports while at the same time posing threats to them by allowing the intrusion of boys. Rather than wisely sticking to actual gender requirements, the group would allow athletes to compete on opposite-sex teams if they’ve undergone surgery or engaged in hormone treatments. So the group really offers no solution at all and is not exactly neutral.

Amidst these viewpoints, Wednesday was the 35th annual National Girls and Women in Sports Day, and the Women’s Sports Federation subverted the observance by declaring:

“The Women’s Sports Foundation supports the right of all athletes, including transgender athletes, to participate in athletic competition that is fair, equitable and respectful to all.”

SBNation Outsports lauded the Women’s Sports Foundation’s pro-trans position and claimed the national observance is a day “for everyone who identifies as female.”

Theoretically, such a preposterous claim would open the door for anyone in the NBA – or the NBA G (minor) League -- to play in the WNBA … and mangle it beyond recognition. Usain Bolt could mop up in the women’s sprints at the Summer Olympics. Males could potentially steal all the females’ sports awards in everything from middle school to Olympic and professional sports. There would be no end to the madness if Outsports’ radical thinking prevailed.

Unfortunately, the foolish sports world is trending the way of the trans athletes. The only opposition to transgender mania is at the state level where legislatures, Idaho and Montana among them, are trying to stop it, and an Alliance Defending Freedom (ADF) lawsuit seeks to overturn Connecticut’s trans policy. Idaho’s law took a loss in a lower court and ADF is appealing that at a circuit court. Overall, few states and few sports associations are attempting to keep the genders separated in competitive sports, and the integrity of female sports is at serious risk.