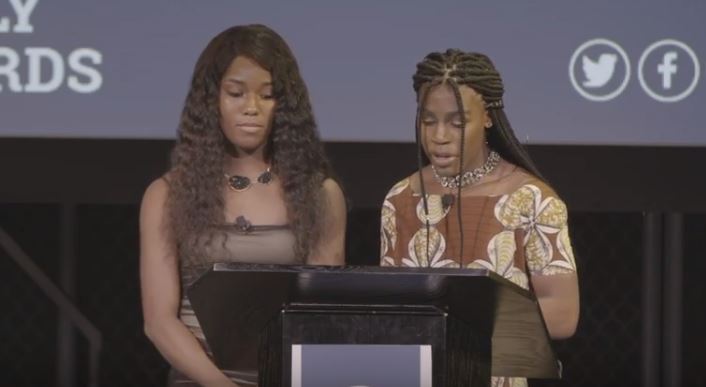 Metro Weekly can't bring itself to label the plaintiffs as girls:

A trio of cisgender female athletes is suing the Connecticut Interscholastic Athletic Conference and multiple school boards in the state for policies that allow transgender athletes to compete in high school sports based on their gender identity.

The girls, who are being represented by the anti-LGBTQ organization Alliance Defending Freedom, claim they have experienced anxiety when they have to compete against transgender athletes, and depression when they have lost to Miller and Yearwood in the past.

“Forcing them to compete against boys isn’t fair, shatters their dreams, and destroys their athletic opportunities," attorney Christiana Holcomb said in a news release. "Having separate boys’ and girls’ sports has always been based on biological differences, not what people believe about their gender, because those differences matter for fair competition.

“And forcing girls to be spectators in their own sports is completely at odds with Title IX, a federal law designed to create equal opportunities for women in education and athletics,” Holcomb said. “Connecticut’s policy violates that law and reverses nearly 50 years of advances for women.'”

Metro Weekly can't be bothered with the legal particulars of the plaintiffs. Before bringing in the ACLU to counter its rival ADF, Riley finds it incredulous that anyone would think boys, with all the appearances of males and the muscular thighs and hamstrings to match, could possibly have physical advantages over girls:

The lawsuit relies heavily on arguments that transgender females — referred to as "males" in the lawsuit — have a biological advantage over females, and argues that the advantage does not disappear, even among transgender athletes who take puberty blockers.

Riley notes the ACLU seeks to join the lawsuit to defend the so-called "right of transgender athletes to compete according to their gender identity."

Chase Strangio, deputy director for Trans Justice with the ACLU’s LGBT and HIV Project, spins it as: “Today’s complaint filed in Connecticut targeting the inclusion of transgender girls in girls’ athletics and specifically naming Terry Miller and Andraya Yearwood is a dangerous distortion of both law and science in the service of excluding trans youth from public life."

ADF's attempt to undermine Title IX by claiming it doesn’t apply to a subset of girls will hurt all students and compromise efforts to end sex discrimination in sports, said the imaginative Strangio in undermining biology: “Additionally, the language of the complaint, which deliberately misgenders transgender youth and demands that high school athletics be organized by chromosomes, is an assault on the basic dignity and humanity of transgender people and a threat to the privacy and equality of all students.”

Yearwood also challenges biology: “I have known two things for most of my life: I am a girl and I love to run.” Miller calls it "unfair and painful" that "she" is being attacked -- not for his superior muscles -- but for "her success."

Furthermore, Miller says he is being shamed and denied opportunities to compete in sports. Which proves the whole point of this trans charade: these boys have combined to break 15 state girls sprinting records by refusing to run for the boys track and field teams at their respective schools where state championships, like they've taken from the girls, would be far less likely. He alleges he's being told "to be quiet, to go home, to stop being who we are."

If his argument for running as a "girl" was so compelling, maybe Miller wouldn't have switched the narrative to race. “There is a long history of excluding Black girls from sports and policing our bodies. I am a runner and I will keep running and keep fighting for my existence, my community, and my rights,” he says.