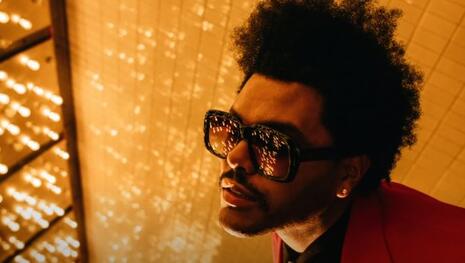 It's official. The entertainer known as The Weeknd will provide the substandard gutter garbage, sexually explicit, vulgar rot. We're not talking about MTV or even the Grammy Awards here. He's actually the NFL's pathetic choice to headline the 2021 Super Bowl halftime show.

Abel Makkonen Tesfaye (seen in photo), a Canadian who passes as a so-called entertainer and who goes by The Weeknd moniker, has been chosen by The NFL, Pepsi and Roc Nation to keep the bar lower than low for this year's Super Bowl halftime disgrace.

During the recent CBS broadcast of an NFL game, shameless studio host James Brown delivered this “exciting news" to a world waiting for the identity of the next Super Bowl embarrassment, Feb. 7 in Tampa. Family entertainment, it's not. Not even close.

"It’s all so stunningly stupid, so backward. At a time when decent-minded folks are abandoning the NFL because they can no longer indulge the increasingly anti-social and even criminal behavior of players, the NFL keeps flooring it in reverse.

"Once again the NFL is stuck for any direction to go other than down. And that course was extended when Roger Goodell, a shameless panderer, embraced X-rated, women-degrading Jay-Z as the NFL’s Minister of Social Standards, and engaged Jay-Z’s athletes and entertainers rep firm, Roc Nation, in a blatant conflict of interest."

Jay-Z selects the substandard R-rated cultural rot for the NFL's Super Bowl stage, and Mushnick is disgusted with his utter dereliction of duty.

Much of The Weeknd's recordings are "standard gutter garbage, sexually explicit and vulgar including a reliance on the N-word to reference black men," Mushnick says.

Here's just one example (there are more, but one is more than enough!) of The Weeknd's lowlife garbage.

Atlanta in 2019 provided another low point in Super Bowl history. Travis Scott and Big Boi provided the vulgar, N-wording, women-denigrating rap with the full approval of the National Football League. And a book by Mike Freeman demonstrates that abusing women is no big thing to the NFL.

Mushnick challenged Brown to look into the CBS eye and recite some of The Weeknd's disgusting lyrics. Knowing full well he won't be honest enough to buck the NFL.

"If he (Brown) sincerely believes that The Weeknd is an appropriate choice — a great choice! — to entertain tens of millions during this Super Bowl’s halftime, he’ll have no trouble reciting some songs recorded by The Weeknd."

Mushnick challenges CBS Sports president David Berson to do the same. "Sing it, fellas! Start with one titled 'Ebony.' Go ahead! Give it a Google!"

Here are the lyrics to Ebony, but be warned. It's not fit for trash can liner.

Mushnick expects Brown and Berson to keep denying the obvious, which other sports are doing also. As a matter of fact, the New York Mets allowed Queens-born rapper 50 Cent to throw out a ceremonial first pitch -- between his numerous arrests.