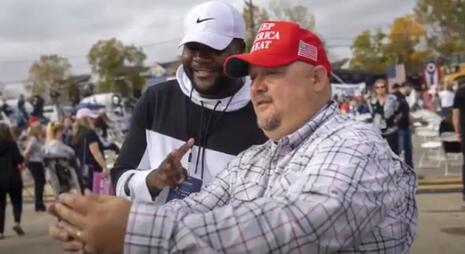 Cardale Jones, one of the heroes of Ohio State's 2014 national championship football team, appeared at Vice President Mike Pence's Monday rally in Columbus, but USA Today Sports's story on the event was light on the football star's presence and top-heavy on attacks by opponents of the Republican ticket.

Jones, appearing in a photograph with a man wearing a "Keep America Great" hat, starred for the Buckeyes at quarterback in the 2014 national championship victory over Oregon. Nevertheless, Rouan tried to assure readers that Jones really wasn't supporting the Trump-Pence presidential ticket.

"I don't talk politics," Jones said before later tweeting: "People are going to infer what they want. I came out to support a friend's business hosting a presidential event and the #FOP, an Organization of law enforcement that holds each other accountable for misconduct."

Though the story appeared in the Sports section, the former Ohio State football great wasn't its focus. Rouan centered his piece on Democrat opponents of President Donald Trump and VP Pence. He wrote: "Emotions ran high at times outside Pence’s rally, where protesters voiced their dissent toward the administration of Republican President Donald Trump."

Linda Strapp, of Columbus, was featured as saying: “I have so much emotion around this president and the administration and they way they have torn down our democracy." She felt obligated to protest "because Trump supporters do not understand the amount of lives the current administration has negatively impacted."

Groups outside the area where Pence spoke displayed signs and flags "calling for change and objecting to a myriad of issues spanning from environmental policy to human rights to racial disparity," Rouan said.

The Ohio Democratic Party invited Dr. Daniel Skinner, an associate professor of health policy at Ohio University, to speak to rally attendees about false information and other issues, Rouan noted.

According to Skinner, the stakes in this election are extremely high, especially because Barrett is on record as opposing aspects of the Affordable Care Act and has voiced opposition to Roe v. Wade. Skinner said: “We are at a moment of absolute crisis, and as the vice president made clear at the debate, they don’t have a plan to undo the damage that’s been done."

Skinner charged that the vice presidential debate demonstrated Pence had no plan to address Ohio's pressing needs either.

“We have to be here to counteract any false information, but also to just make sure we are present, especially as people are voting right now,” Skinner added.

Opposition to Pence and the Republicans consumed more than half of Rouan's story, and Jones's inclusion quickly became an after-thought.

That same year, the far-left newspaper also ran a story featuring the Human Rights Campaign's smearing of Vice President Pence ''one of the greatest threats to equality in the history of our movement.”