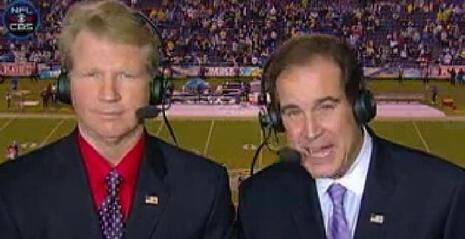 CBS Sports Chairman Sean McManus gave his NFL broadcast teams a crystal clear ultimatum prior to Sunday's games: no one was to interject personal opinions on Black Lives Matter, kneeling or social justice during the day's broadcasts. Yeah, a ratings bath like the one incurred by the league in Thursday's game will do that!

For once, the fans who prefer football business in the business place of football were heard. The Thursday game in Kansas City suffered a 10-year low in viewership for an NFL season opener, along with a 16.1-percent decline over last year's opener. Fans attending that game booed, too.

“We need to thread the needle just the right way, because there are people who are tuning in just to hear about football. So we need to make sure that we don’t overdo the emphasis on what’s going on in our country, but we’re not gonna ignore it.”

McManus announced CBS broadcasters (see file photo of two of their broadcasters, Phil Simms, left, and Jim Nance) would walk a very delicate line of coverage and would not interject opinion or philosophy because it's become very clear that people don't want politics mixed in with sports. "They’re there to cover the game. But if something else happens to be part of the story, they’re going to tell that story.”

However, the network pregame shows were immune to self-censoring.

Jay Busbee, of Yahoo! Sports, wrote of the CBS pregame show, "CBS leaned hard into the story, opening 'The NFL Today' with a montage of recent events involving protests of the police, including images of George Floyd, Breonna Taylor and other victims, along with testimony from players and coaches."

CBS's Bill Cowher preached to fans by saying, "Fans, please don’t be judgmental today. Listen to the statements these teams are making. This is not about the flag. I love this country, but we can all do better.”

On ESPN's "Sunday NFL Countdown" Randy Moss implied that Americans can legislate racial justice on Election Day, saying, “If we want change, America, we gotta get off our asses and vote.”

On "Fox NFL Sunday," host Curt Menefee introduced a tribute to Colin Kaepernick by saying, "And while the pursuit of equality for all in America has been going on for more than four centuries, it arrived upon the NFL sidelines four years ago when Colin Kaepernick took a knee that activated a moment which has now become a movement."

What Kaepernick did made a lot of sense, and if you take a knee for social injustice it's a "symbol of hope," viewers were told. Alicia Keyes was introduced to sing the Black anthem, "Lift Every Voice and Sing." The video performance was interspersed with images of athletes protesting.

Busbee predicted the networks will gradually scale back their coverage of the protests.

Once the pregame shows ended and the networks went to the stadiums, whole NFL teams indicted America for so-called systemic racism. At least six teams remained in their locker rooms during the national anthem on Sunday afternoon.

As reported by ESPN, the Colts, Packers and Jaguars issued statements claiming the protests are not directed at the national anthem or the flag, but for social justice and equality.

Most of the Baltimore Ravens players wore black t-shirts in pregame warm-ups stating "Injustice against one of us is injustice against all of us" and "End Racism" and the majority of players kneeled or sat on the bench during the Star Spangled Banner.