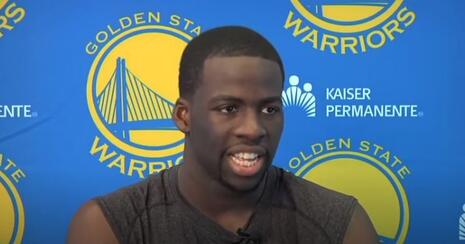 Oh, joy, tonight's Monday night debut of "The Arena" on TNT will give social justice warriors one more forum to shove sports to the sideline. Joe Biden's campaign will also get a boost from the program featuring Charles Barkley, Draymond Green, Jemele Hill and others, which starts tonight, airs nightly through Friday and continues through the NBA's upcoming shortened season.

Sports will most definitely be relegated to the end of the bench on the hour-long episodes of "The Arena."

USA Today is priming this program and how Green, the NBA's poster child for bad behavior, plans to go heavy on politics. Sports writer Mark Medina explains how Green plans to use this SJW showcase:

"The series, which will partner with Bleacher Report, will focus on the coronavirus pandemic, Black Lives Matter, systemic racism and how the NBA will navigate a resumed season without fans at the ESPN Wide World of Sports Complex after halting operations on March 11. It also plans to feature various contributions from a prominent journalist that frequently addresses racial issues (Jemele Hill), a rapper and activist (Killer Mike) and an Academy Award-winning filmmaker (Lesley Chilcott)."

Green (appearing in above photo) plans to go much further than the issues mentioned above. He's one of the NBA players joining LeBron James in More Than a Vote, "an initiative aimed to address voting suppression in Black communities," Medina reports. Not to mention aiming to get Democrat Joe Biden into the White House.

Additionally, Green, an investor in tele-dentistry, is pumping his opposition to the Dental Practice Act, a California bill that would actually require dentists to conduct in-person examinations, making "treatment increasingly unaffordable in the Black community." Just what basketball fans have been begging TNT for.

It's no coincidence either that this red meat show starts as campaigns heat up for the fall elections. How did the Democrats fall into such luck with a show that's sure to provide free publicity for far Left politics?

Green admits his political bias, and Medina makes no effort to include balance in his reporting:

"It seems timely considering Green’s observation that 'our lives are at stake right now' less than four months away from the presidential election between Republican incumbent Donald Trump and longtime Democratic senator Joe Biden. Green is among many NBA voices who have criticized Trump for his divisive rhetoric, particularly toward the Black community. Aware that Trump defeated Hillary Clinton in his home swing state (Michigan) by just under 11,000 votes, Green remains mindful that any effort to address both increased voter registration and efforts to suppress voting in the Black community could determine the election."

“That’s such a small margin," Green says, adding, "if we do our job as the African-American community and get out and vote, that just does not happen. So maybe we’re not in a pandemic right now. Maybe things are handled a little differently. But due to a extreme lack of leadership, these are the issues we’re faced [with] today as a country. I just want to do my part. If you can change a few minds along the way, you can possibly change the course of history.”

Green, one of the dirtiest and most divisive players in the NBA, says he'll continue to push his issues and support those fighting for Black people who are being oppressed. “It’s important we continue to move forward and continue to stand up for what we believe in. We can’t stop now. The fight is just beginning. It’s far from over.”

And hours of forthcoming programming on TNT's alleged basketball coverage is just the place to promote partisan politics.