Abdul-Jabbar Steps Up Attack On Trump, Compares Prez to Nazis in Hunters Series 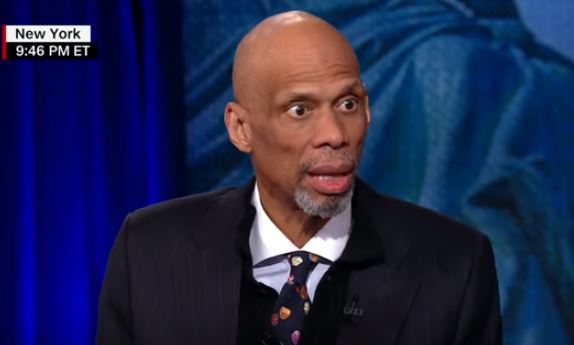 NBA legend and Trump hater supreme Kareem Abdul-Jabbar leveled a double-barreled attack on the president in recent days. In The Guardian, he claimed the NBA is providing a patriotic response to the pandemic, but President Trump is promoting his own self interests. In The Hollywood Reporter, Abdul-Jabbar says the president reminds him of the Nazi's exploiting people of color in the Amazon streaming series Hunters.

Abdul-Jabbar also promotes former President Barack Obama as a beloved leader and savages Trump as a leader forming a legacy of shame.

"The Nazis in Hunters are powerful people in business and government, devoted to protecting only those they deem worthwhile humans," Abdul-Jabbar writes. "The government’s early response to coronavirus was not a Nazi conspiracy, but it was 'Nazi-adjacent,' meaning that the same attitudes regarding race and class were being employed in determining who’s worthy of government protection. Despite the limp efforts of Pence and his administration lackeys to now praise Trump for his mythological early and decisive actions, his actual failure as a leader will forever be Trump’s legacy of shame."

Amazon’s thriller series Hunters is enthralling to Abdul-Jabbar because he sees parallels between the Trump Administration and leftover German Nazis from World War planning a Fourth Reich "built around a biological attack aimed at killing the poor, particularly people of color. Race- and class-cleansing made easy."

"Far-fetched liberal posturing?" asks Abdul-Jabbar. "Not if you’ve followed the Trump administration’s blame-the-black-guy rhetoric and foot-dragging behavior in response to the coronavirus pandemic. The scenes from White House pressers remind of the gleefully unrepentant Nazis in Hunters."

To Abdul-Jabbar, who recently advised Democrats how to beat Trump, the president is like a sneering Bond supervillain allowing the virus to spread. The "villain" knows that people of color will suffer the most, and testing the poor is not a priority. Trump only got concerned about the coronavirus when his business crowd were affected.

Amid the public outrage (of Democrats) over his supposed lack of leadership, Trump blamed "usual targets" for COVID-19, Abdul-Jabbar asserts. "Non-white people. For Trump, the blame falls directly on a black man, the Chinese and the Mexicans."

During a March 13 news conference President Trump refuted the claims of critics that he's responsible for the spread of the virus in the U.S. He made the mistake of criticizing Abdul-Jabbar's low-standard political hero: Obama.:

"Trump will never get past the fact that Obama was loved because of his intelligence, compassion, humor and humanity. Trump isn’t loved but rather adulated, the way cult members mindlessly follow a stern dictatorial father-figure who tells them what to do and think. Like, well, Nazis. ..."

President Trump is, in Abdul-Jabbar's jaded opinion, a man who would abandon all honor, all morality and the rule of law while basking in his orange glow.

If an award were to be given for Trump Derangement System, Abdul-Jabbar would clearly be among the leading contenders.