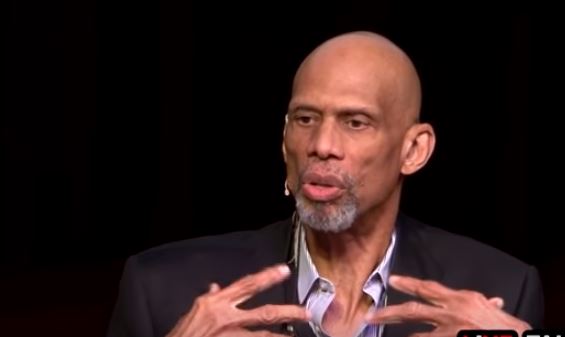 "The NBA has led by example and put public health above self-interest, which is more than the Trump administration can say," writes "Kareem Abdul-lower-the-bar," I mean Abdul-Jabbar. The Trump-hating former NBA center is obsessed with hitting the president below the belt, and he filed his latest attack in the The Guardian in a post titled "Why suspending the NBA season was a glorious act of patriotism".

Like Democrats using the COVID-19 crisis to score political points at President Trump's expense, Abdul-Jabbar compares the commander in chief with Utah Jazz center Rudy Gobert, who tested positive for the coronavirus recently, leading to the NBA putting the season on hold until further notice.:

"... Gobert is the poster boy for those who, like President Trump, have tried to ignore or downplay the virus’s dire impact. In fact, at a press conference a few days before he was diagnosed, Gobert made a point of playfully touching all the microphones to make fun of the public’s concern about the spread of the virus. I’m sure those who used the microphones after him aren’t laughing. ..."

Abdul-Jabbar is not just a left-wing political pundit now, but he's also a self-appointed health expert who doubts President Trump's assurance that vaccines will be available relatively soon. That could take months to years, Abdul-Jabbar counters. "And even if warm weather slows the virus, it come back even stronger in the fall."

The NBA deserves much credit for suspending play and leading by example, but the Trump Administration is dragging its feet, Abdul-Jabbar charges:

"What makes the actions of the NBA and other sports so significant is that they are doing this voluntarily, without coercion from the federal government. They could have dragged their feet – as the federal government did – and wrung every last dollar out of the public before closing their doors. But they put public health above self-interest, which is something the Trump administration can’t say. They are leading by example, which is something Trump himself hasn’t done. Just a couple days ago, while the CDC and every other health advisory group was emphasizing not shaking hands, Trump waded into a group of fans to shake their hands."

Another Abdul-Jabbar criticism is that Trump got rid of President Obama’s Pandemic Response Team. That charge has been debunked and, in fact, the Trump Administration overturned an Obama regulation that bottle-necked testing through the federal government. States and universities are now free to expand testing.

This administration is bungling preparedness strategy, Abdul-Jabbar claims. It's pursuing "head-in-the-sand policies built on incompetence, fear of losing voters, and lack of a basic understanding of science and math."

Additionally, Abdul-Jabbar rants that "we were arrogantly lagging behind while patting ourselves on the back with Trump’s false claim that '[the number of infected is] going down, not up. We’re going very substantially down, not up.' ”

The former Milwaukee and Los Angeles NBA player concludes: "So, thank you NBA, NCAA, NHL, MLB and all the other organizations who have put public welfare above their own monetary gain. I never thought I’d see the day when Big Business acted more patriotic and selfless than a presidential administration."

California's Democratic Governor Gavin Newsom disagrees with Abdul-Jabbar's assertions that the administration is all wrong in its handling of the crisis. He praised President Trump Monday "for supporting his state as it assisted with the repatriation of passengers from the coronavirus-infected Grand Princess cruise ship."

Also, CNN recently reported that testing in the U.S. is done at the discretion of doctors ― not the federal government. The U.S. currently ranks ninth internationally with 5,871 infections and sixth in deaths with 99.