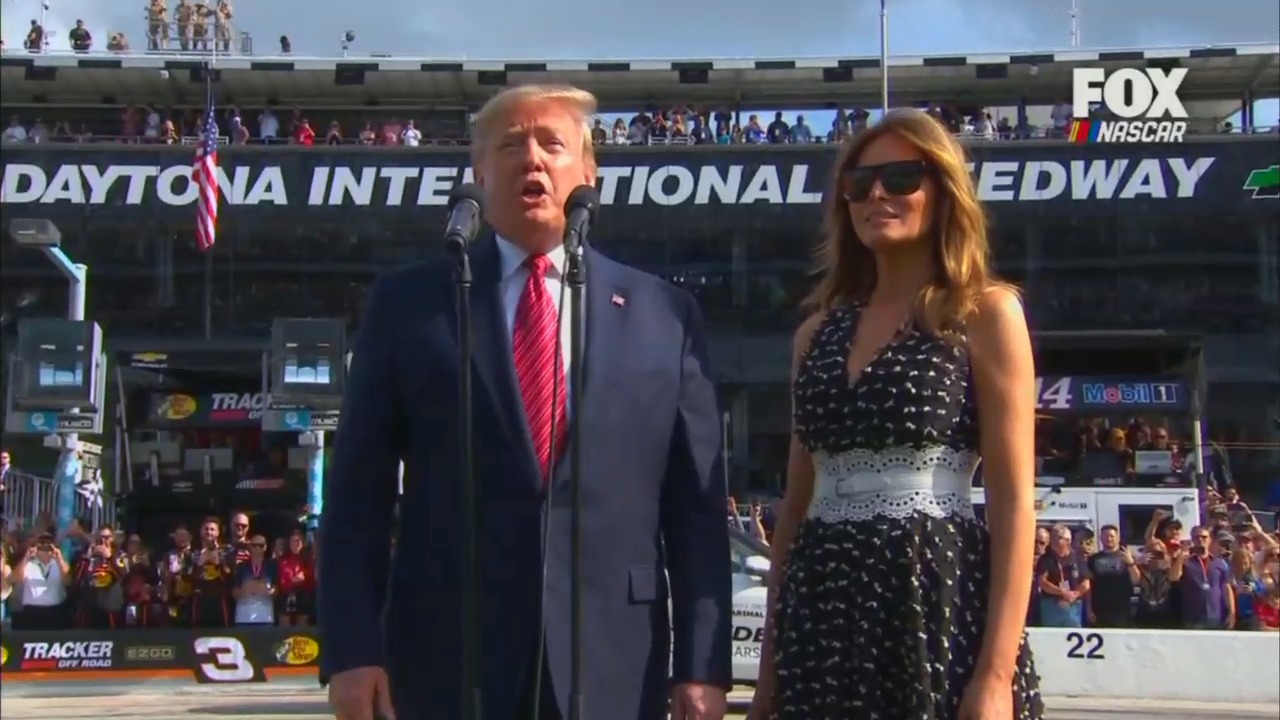 When Trump arrives Sunday at Daytona International Speedway to deliver the command for drivers to start their engines, the race's grand marshal might as well be at one of his campaign rallies. High above banners flying for NASCAR stars like Chase Elliott and Kyle Larson, Trump flags wave atop row after row of flashy RVs.

The left-wing U.K. paper The Guardian made sure its readers knew that NASCAR appeals mostly to old, white Republicans. Media have previously reported that former President Barack Obama was also just campaigning when he attended basketball and baseball games and was more popular with Democrats and blacks. What? They never reported that? No, they didn't.

There was also New York Times White House correspondent and CNN political analyst Maggie Haberman, who showed off her utter disdain for the millions watching by accusing Trump's appearance in The Beast to be a political event. No word on whether Haberman was incensed at Barack Obama attending a March Madness game: 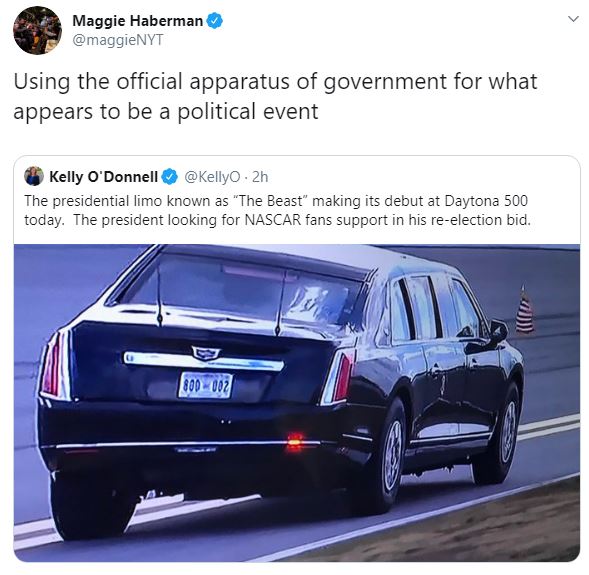 News of Trump's public appearances are, of course, incomplete without mention of the "I" word. The AP writers crossed that one off their list in the first paragraph:

"Stroll through the Daytona infield and fans can grab a seat next to President Donald Trump and get a sweet taste of impeachment.

"Debi Ringhaver is mixing cocktails for curious NASCAR fans who stop in their tracks at the sight of her lifesize mannequin of Trump, chilling on a lawn chair, holding a book titled 'The Truth Behind Trump' and wearing a red 'Donald Trump 2020' baseball cap.

"Hundreds have stopped by her RV this week for a selfie or a chat or a sip of 'The Impeachment,' a blend of peach vodka, champagne and peach nectar. The 'Subpoena Colada' also is in the blender, but Ringhaver concedes 'it's just a pina colada with a better name.' ”

The AP writers also noted that NASCAR "has a complicated relationship with politics and social issues." Funny how media never mention that the NFL, which shelled out $90 million for social justice activism and denied a pro-life Super Bowl ad while featuring drag queens and raunchy halftime sleaze, doesn't have a major problem with social issues.

AP also dinged Trump: "The tailgating feast at one stop was fit for a president who served fast food at the White House to college football champions: deep fried honey buns and deep fried Oreos were on the dessert menu -- or maybe it was dinner? -- and cheap domestic beers easily slipped into NASCAR koozies."

A couple positive quotes slipped into AP's story, though. Race car driver Joey Logano, who has been honored at the White House, said it was "amazing" Trump was attending “The Great American Race":

"The leader of our country is coming to the Daytona 500. How cool is that? That kind of solidifies what our sport is. It's a huge event. We're a big sport, and to be able to have the president come here, that's something we all should be proud of. Whether you support him or not, it doesn't matter. It shows the unity in our sport and how big our sport really is.”

Gelson and Fryer wrote that Trump's supporters at Daytona were comforted by the fact that "their love for the president is a deep tie that binds":

"We're a different group of people," said Georgia native Scott Gregory, attending his fifth straight Daytona 500. “When you walk around and talk to all these folks, we're all pretty much of the same mind of what we think of the U.S., leadership, our president, and we're all pretty much in line as far as that thinking. I don't think it's true of other sporting events.”

Bloomberg's Josh Wingrove and Jennifer Jacobs also characterized the race as a Trump campaign event following impeachment. "President Donald Trump is taking his campaign to the Daytona 500, seizing center stage at the popular race with the presidency’s most iconic vehicles as he looks to lock down support from his base in the aftermath of the impeachment trial."