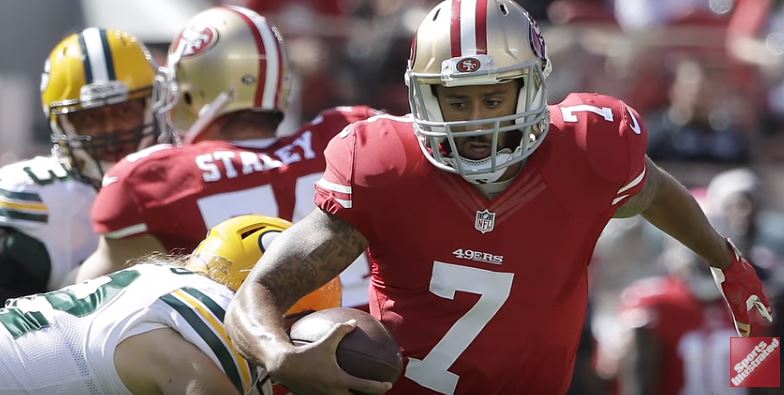 Prior to the start of Super Bowl 54, The Root website called for a boycott of the big event. First and foremost among five reasons given for a boycott on The Root's Twitter account was Colin Kaepernick being blackballed by the NFL merely for trashing his home country for alleged racial injustice.

Additional reasons given by The Root for fans to tune out the Super Bowl are Trump-supporting NFL owners who helped the president raise funds, the physical dangers of playing football, the NFL not adequately addressing domestic/sexual violence among its players and Obama hater/singer Hank Williams Jr. being featured during telecasts of the Monday Night Football.

The Root's tweet starts with Shannon Sharpe, former NFL star and co-host of The Undisputed TV program, complaining about Kaepernick's exile from the NFL. Kaepernick spit in the league's eye by protesting during the national anthem and then by suing the owners for allegedly colluding to keep him out of the NFL, but never mind his vitriolic sniping from the sidelines.

The Jets, Rams, Patriots, Jaguars and Cowboys are all shamed for donating money to President Trump, often referred to by The Root writers as a racist. So fans were asked to take that out on the Chiefs and 49ers, two teams whose owners did not contribute big money to Trump.

Incidentally, for anyone who took The Root's advice and boycotted the game, they missed a commercial featuring Alice Johnson, an African American woman imprisoned for a crime she did not commit and ultimately set free due to President Trump's prison reform actions.

No. 3, football is too dangerous and 90 percent of NFL players have suffered major injuries, some as many as three such injuries. When the league settled out of court with 4,500 former players who filed suit the dastardly NFL claimed it was not an admission of guilt.

Fourth, the NFL has not adequately dealt with players who battered wives or girlfriends. The Root's tweet includes video of former Ravens halfback Ray Rice punching out his wife. There's no defending the often feckless NFL here, and the league embarrassed itself Sunday by announcing that alleged former child-beater Adrian Peterson had won the Art Rooney Award For Sportsmanship. The award is for on-field deportment; off the field he's been a monster to his own children.

Additional justification for the call of a boycott of Super Bowl 54 is Williams' role as singer of the opening song for Monday Night Football. He once compared Obama to Hitler and Obama and Joe Biden to the Three Stooges. This offense had nothing to do with Jimmy Garoppolo or Patrick Mahomes, the quarterbacks for this year's Super Bowl matchup.

Williams, who's white, was originally dropped by ESPN, but then brought back. For calling Trump a "white supremacist" and other offenses, Jemele Hill, who's African American, was pushed out by ESPN a few years ago. Too much for The Root to stomach.

With a weak Sunday night television lineup of alternatives to the Super Bowl, including America's Got Talent and America's Funniest Home Videos, some who took The Root's advice may have been greatly disappointed they missed Super Bowl 54.