As a professional protest profiteer, The Nation's sports editor Dave Zirin has made a living off the stories some of America's most notorious, if not most despised dissident athletes. Most recently, he's written a book on racism with pro football radical Mike Bennett, and now his Edge of Sports podcast glorifies Race Imboden, a U.S. fencer and past Olympian who took a knee on the victory podium at the recent Pan American Games in Peru.

For the record, here's Imboden's tweet on the disgusting behavior that led to his being placed on 12-month probation by the U.S. Olympic and Paralympic Committee: 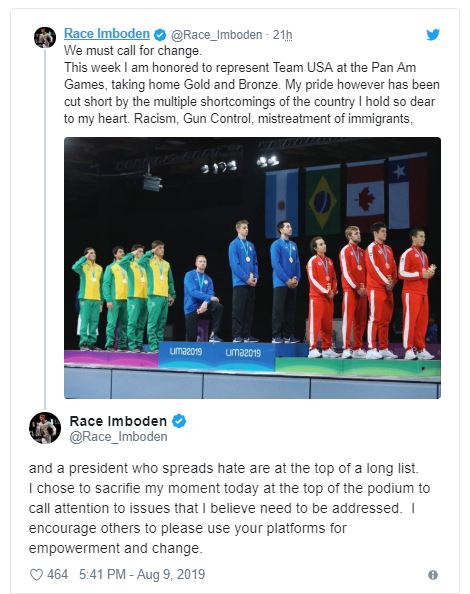 In the podcast interview, Zirin was eager to find out who served as Imboden's inspiration at the intersection of sports and politics. Muhammad Ali was at the top of the fencer's list, he said.

Why did you kneel, Zirin asked, and Imboden (seen in recent CNN interview above) blamed President Donald Trump in part:

"I'd taken a knee before about a year earlier and I had zero press about it ... (this time it was) to stand up to the things that were happening in the country, the injustices. ... The week before my competition was the terrible shootings in Dayton and El Paso. And it came out that the president's rhetoric was a direct influence on the shooter in El Paso. I was waiting to stand on the podium and I saw a text from my mother that said it's time for everyone to use their voice, everyone should speak up. And I decided that was my time to use my voice, the moment that I wanted to protest. ... It was definitely instantaneous, it wasn't like a pre-planned thought or anything like that. ... "

Were there broader issues behind the protest, Zirin inquired? Imboden invoked Colin Kaepernick and, like a good bleeding heart liberal, his own white guilt:

"Specifically the shootings were the catalyst of the idea that made me actually take the knee. But just the injustices, the racism, and when you see Colin Kaepernick talking about police brutality. And growing up in New York and seeing some of those things myself. ... My neighborhood was very white and privileged and wealthy."

In light of the governing Olympic organization's probation for Imboden and U.S. hammer thrower Gwen Berry (who also protested at the Pan Am Games), the fencer expected more political conflict ahead. "It's going to become more difficult as athletes are outspoken," he said. "And it's impossible to stop the politics intertwined with sport. ... It's important that athletes continue to speak out, and we just have to be very careful about the moments and what platform we use."

Zirin also asked what would happen if Imboden appears on the victory stand in Tokyo next year.

"I spoke up about the protests, it wasn't about me," Imboden said.

A lot of things can change. A lot of things can happen. I just know that, in Tokyo, I'll be very aware of the state of our country and where the state of injustices in this country as I was beforehand. So that's the main thing for me. I will be very aware of that. It's not about me saying I want to protest in Tokyo. It's about everyone being aware, and I think this will be a very political Games. And I think that because of our president, because of the state of our country, I think that there will be a lot of athletes that will be thinking about that going into Tokyo.

Oddly, Zirin's final question targeted Imboden's music preferences and whether or not those choices serve as political inspiration.

Imboden replied that he listens to hip hop and to Jay-Z, "even though he just signed a deal with the NFL which I didn't necessarily agree with and we'll see where that goes." Kaepernick's apologists accused Jay-Z of selling out the protest movement because the rapper said it's time to move on from kneeling.

"Thank you so much for your courage," Zirin said in closing out the interview with his newest radical hero.