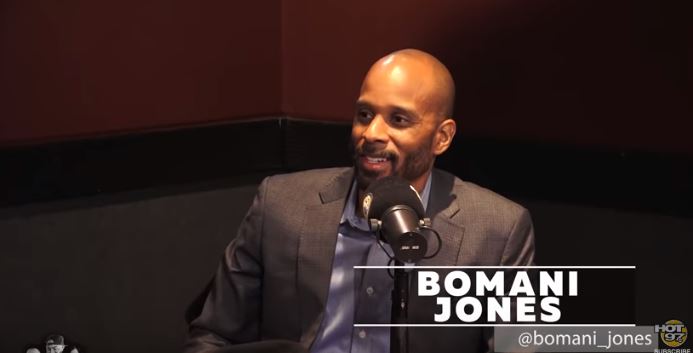 Though the NFL recently tilted further to the cultural Left by aligning with rapper Jay-Z for the direction of future Super Bowl entertainment, ESPN's race-baiting Bomani Jones is ripping the new partners for selling out Colin Kaepernick. Jones took to the sports section of the ESPN blog, The Undefeated, to bash billionaire NFL owners, Jay-Z and "white supremacist" President Donald Trump while defending Kaepernick's social justice crusade.

Ross, who started an organization (RISE) to pursue social justice in Miami, held a fundraiser for President Trump "at a moment when the White House and white supremacy were inextricably linked," Jones writes.:

Jones (appearing above in file photo) writes that while Ross is clear that he and Trump "disagree on race, the money he’s raising will fund a campaign that will almost certainly feature the president’s views on race. ... When in conflict with the president, Ross has chosen his friend (Trump) and what that friend can do for him over his purported principles. While Jay’s support for Kaepernick was almost certainly genuine, he is in bed with Kap’s primary enemies, those who fought the hardest to silence him and his message."

Ross also gets dinged here because the money he raised to amplify the president's message is more than the NFL donated in 2018 to the NFL Players Coalition, a social justice movement Known as "Inspire Change."

Jay-Z's company, Roc Nation, reached an agreement with the NFL to produce entertainment for "diverse acts" for Super Bowl halftime. Jones claims the league has shown little support for the aims of Inspire Change.

"Jay-Z and Ross are trying to play both sides," Jones writes. "Each wants the world to know he may be an apex predator capitalist, but, beneath the cold cynicism that made each rich, there’s a heart of gold and he wants to fix the wrongs of the world. I mean, it’s possible that’s true. But few become billionaires by being good. Helping uninvested parties isn’t as lucrative as hurting them.

"Remember that while watching two men, ostensibly trying to improve race relations in America via sports but doing business with people many think — and, in some cases, know — are aligned on the opposite side of that fight. Notice that they’re moving the same way. Both are billionaires before all."

The NFL is using Ross and Jay-Z for credibility the league doesn’t have, Jones continues. Through RISE, Ross is serving the NFL's interests. Jay-Z comes across as its “figurehead” because his voice is so big among African-Americans. What each has theoretically done is to take the voices away from the players and deprive Inspire Change of its huge NFL platform, Jones contends.

Come to think of it, Jay-Z once sold “Occupy All Streets” T-shirts and refused to share the profits with the Occupy Wall Street movement, Jones says. And last week he said: "I think we’re past kneeling.” Jones says Jay-Z the billionaire has more in common with NFL owners than with players and with Kaepernick, who made his impact on the playing field.

On Wednesday, Jay-Z said that doing business with the NFL has the potential to help “millions and millions of people.” Unconvinced, Jones says it's hard for Jay-Z "to reconcile with the indefensible unemployment of the man who spurred the league to get involved in these matters, whom Jay has called 'an icon.' It’s glaring that the Roc Nation partnership will serve a program Kap believes is a subversion of his initial message (and one where the league, not the Players Coalition, controls the board)."