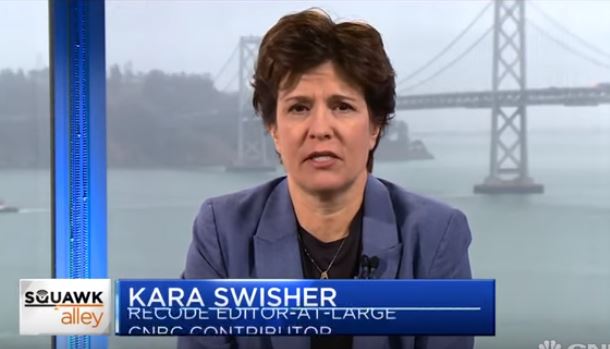 The truth is coming out. Soccer firebrand Megan Rapinoe is not the poor little victim of presidential bullying that her media enablers have been making her out to be. In a Vox Recode interview with Kara Swisher (in photo) she goes to the extreme of claiming membership in the "Squad" as a victim of President Trump's bullying. Trying to have it both ways, Rapinoe tells Swisher that Trump's tweets made her famous and spurred Team USA onto World Cup victory.

Rapinoe is a Colin Kaepernick-inspired social justice warrior who said this spring she refuses to honor America during the playing of the national anthem as a ''big F-you" to President Donald Trump. During the World Cup, she told a reporter she would not go to the "fucking White House" if the U.S. won the championship. Trump responded on Twitter that she should win first before talking White House, then invited the team win or lose. To many in the media, Trump was the villain, Rapinoe the damsel in distress.

“And I was also like, ‘You know what? This is so rude.’ You should be proud, like doing everything you can or not doing anything, right? To make this team successful. People are getting on board. It’s the World Cup. It’s America. You love America. Like, ‘Go USA.’”

Vox writer Eric Johnson, who embedded the Swisher-Rapinoe interview in his story, interjects, "As fate would have it, Trump’s attacks on Rapinoe may have actually helped the US women’s team. Rapinoe says the Trump tweets made her famous.

“I felt like it actually sort of unified the team,” Rapinoe said. “Everyone was like, ‘You’re a G, Rapinoe!’ Like, ‘Get him!’ From the back of the bus. So it kind of unified everyone in that way. But I was also like, ‘You’re rude. This is rude.’”

After trite discussion of soccer, Swisher got down to the heart of the matter: politics. "So speaking of attention, let’s talk about Trump. Did that help you get into the mindset like, 'This guy challenged me to get these goals. I think I’m going to kick his ass.'”

Rapinoe replied: "Oh, gosh. I mean actually, my initial reaction was like, 'This is LOL. This is crazy talk.' How many national security items did you skip over? And you’re like, 'Let me just tweet Megan Rapinoe.' What is that? What are you doing wrong?"

"Iran, North Korea," Swisher volunteered. To which Rapinoe added, “Southern border, all good. We’re just going to ... That’s fine. I’m going to go on this crazy tirade with weird capitals all over the place. And challenging me."

Swisher dismissed Rapinoe's "it's a big F-you to Trump" comment as a "one-off" in which the soccer player "cursed a little bit." Rapinoe responds that someone had been holding onto that little nugget for a couple months, implying her insult was perfectly fine, but the president's response was totally out of line. Then she says, “We’re going to win. So this is not going to age well. ... This is the biggest thing and you’re heaping down this bold beep on all of us. This is ridiculous, this is so rude."

Rapinoe said her only thought of going to the White House would be if she were being inaugurated and sworn in as president.

Swisher asks about a political career because the bar is set so low now, and Rapinoe says she's wildly unqualified, which her friends are cool with. She's more interested in the role of an activist because things are "so messed up right now.":

"So many to choose ... unfortunately. I mean, immigration obviously right now I think is an extremely pressing issue, what’s happening at the southern border. Our prison system and mass incarceration. I mean, it’s like once you get into one thing, it’s everything. It’s all the same sort of thing."

Add white nationalism to that list, Swisher says. Her brother voted for Trump and she's still not speaking to him. Rapinoe has a drug-addicted brother who's been in and out of prison and hers is "a very big, loving family. We’re all fucking kooky and crazy ... ." In fact, Rapinoe now considers herself one of the congressional "Squad" members, a sorority of Trump-abused women.

Rapinoe the role model indicates her inspirations are Kaepernick and wine. And her significant other, WNBA player Sue Bird, whose virtues were extolled by CNN's commie Van Jones. This power couple has surpassed Ellen DeGeneres and her partner, Swisher claims.

During Q&A, Rapinoe tells the audience that bullies (like the president) are "really insecure and they’re sad in their own right." Rapinoe says she learned a lot by kneeling during the national anthem -- "about being in this moment now."