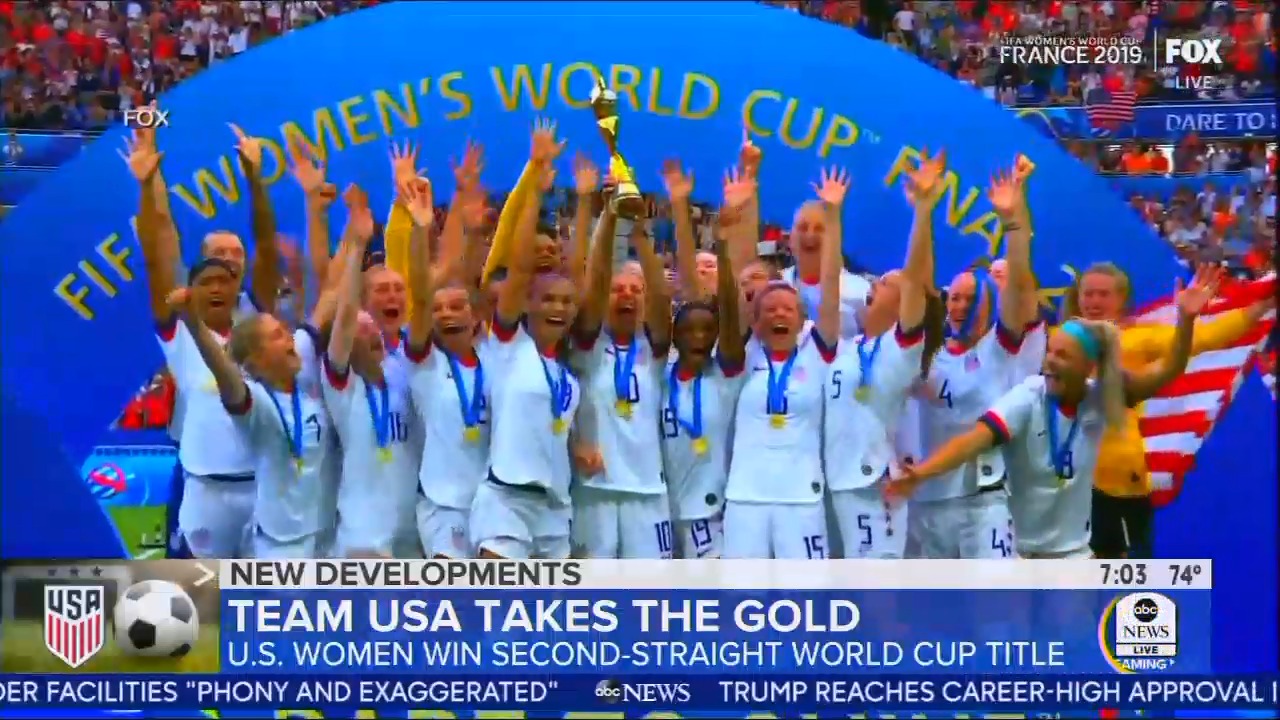 Add the New York Daily News's Filip Bondy to the list of media over-inflating the U.S. women's national soccer team's place in the world. USA Today writers have been obsessed beyond obsession with this team and its gay rights and anti-Trump crusades. Bondy says the players on this World Cup championship team are making America great again as they dictate social and political policy. His flair for exaggeration ranks right up there with the star American striker Megan Rapinoe, who claims the lesbian-dominated team is changing the world.

The U.S. women's team will be honored Wednesday in a "Canyon of Champions" parade in New York City, prompting this mush from Bondy:

"They come to our town Wednesday, to a parade through the Canyon of Heroes, as much a cultural phenomenon as four-time World Cup champions.
"That’s the way it always seems to be for the U.S. women’s soccer players, who spun our heads for the first time back in 1999 and now dictate social and political debate wherever they happen to land."

Bondy encourages people to enjoy the parade for its feats or its politics. "Because on the fields of France (where the team won the World Cup Sunday), they made America great again."
Just what are these women dictating and how did they MAGA? "Equal pay. Gay rights. The man in the White House. And, by the way, there was that victory over Netherlands on Sunday in the Cup final. This is a transcendent bunch, a group that empowers women, even while demoralizing and humbling female opponents," Bondy bloviated.
Rapinoe said as much, too: “I feel like this team is in the midst of changing the world around us as we live and it’s just an incredible feeling, really." She's personally "changing the world" by disrespecting the national anthem and by telling the world she absolutely will not visit the "f------" White House because she hates President Donald Trump so much. Now there are some good reasons for little girls in Topeka to idolize her.
Media are positively enamored with the outrageous Rapinoe, a wild-eyed supporter of Colin Kaepernick. This is all Megan's story, Bondy asserts. "It was Rapinoe who sparred most defiantly with the president of the United States, announcing in the most explicit terms she would not visit his current place of residence." Bondy continued:

"When the American fans in Lyon chanted, 'Equal pay,' after the win on Sunday, at the championship ceremony, it was Rapinoe who championed that cause again, who reveled in their words. Now you can be sure that same chant will arise on Wednesday, when Rapinoe and the others ride past the city crowds and under the ticker tape.
“I love it,' Rapinoe said. 'The movement is swelling before our very eyes. This is what the people want. Give the people what they want.'”

Amazingly this seemingly perfect team is not perfect, Bondy confessed though. Diversity on the roster remains a problem, because of white privilege. Minorities don't have thousands of dollars to provide advanced soccer opportunities for their kids. The only minority players on this championship team are Crystal Dunn and Christen Press, and Bondy wrote: "That was what passed for diversity, but it will have to do for now. Hopefully, those numbers will continue to grow for 2019. Maybe Rapinoe, or another player, can embrace that cause, along with the many others." Leave it to Megan, the miracle worker.
The diversity problem could have been addressed last year if the team had not booted African-American and Christian defender Jaelene Hinkle off the team. This tolerant-lite team, at the urging of tolerant-lite LGBT fans and media, had a fit over the mere thought of allowing someone like her to occupy a position on the team. That's a strange way to change the world and promote diversity.