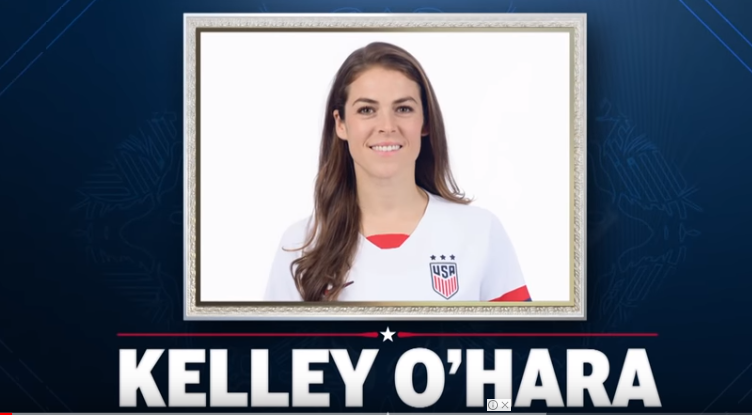 SBNation trans writer Kim McCauley waved off all objectivity in her first sentence, admitting she's "an unabashed fan" of the World Cup champion U.S. women's soccer team. Her post, "Why the USWNT's open queerness matters", confirms what's been obvious throughout the duration of the World Cup, by the team and its media friends: the U.S. team is a bastion for queer hope and a vehicle for LGBT+ pride.
"I’m supposed to cover the United States women’s national soccer team critically, and I try very hard to do that, but I’m also an unabashed fan of the team," McCauley wrote after the USA beat Netherlands Sunday in the World Cup finals. "I started being a fan when I was a kid because I like soccer, and they play soccer well. Also, they’re women, and even though I’d never heard of trans people before a few years ago, I knew I wanted to be a woman. I could live vicariously though the USWNT players. I thought, I wish I could be like them when I grow up."
As McCauley covered the U.S. team and spoke with its players, she's come to like them even more because it's "becoming a bastion of queer hope and excellence along a similar timeline to me coming to terms with being a bi woman, and realizing that was not something to be ashamed of."
Previously, McCauley writes, the American lesbian soccer stars kept their sexual orientation secret to retain endorsement opportunities. Not anymore. Now, with the media's encouragement, they flaunt it for all it's worth:

"But at some point, cultural acceptance, corporate willingness to play ball and individual bravery all met at the same apex, giving us the wonderful gay ass USWNT that we get to enjoy today. Now we have Megan Rapinoe yelling 'GO GAYS' and saying she would have no problem competing against trans women. Ashlyn Harris and Ali Krieger are engaged and playing on the USWNT together. Adrianna Franch has been out for several years and is engaged. Tierna Davidson was making Instagram cooking videos with her girlfriend before she was on the team. Official team communications offer support for the players’ queer expression."

McCauley neglected to mention that U.S. coach Jill Ellis is married to a woman as well. Nonetheless, she believes some closeted or questioning people might not be as brash as the obnoxious U.S. national team co-captain Megan Rapinoe, but that makes the audacity of what her teammate Kelley O'Hara (photographed above) did much more important. After Sunday's match, O'Hara went to the stands and kissed her girlfriend. McCauley says ...

"This is not a shocking or revolutionary act in 2019. Lots of people are queer in public now, and everyone knows there are queer players on the United States women’s national soccer team. But what made this moment significant is that O’Hara had not previously made any kind of announcement about her partner or sexual orientation. She didn’t follow this moment up with an interview, a social media post, or a proclamation of any kind. She just had an affectionate moment with her partner, then continued her life as normal, because what she did is normal and should not require an explanation."

That so-called "normality" was stressed throughout the tournament by advocacy writers at SBNation and USA Today. Apparently it took the queerness of Rapinoe, Harris, Krieger, O'Hara, Davidson and Franch to provide "every queer person" what they need to feel like they can be themselves.
"There isn’t one right way to be queer," gay "advice columnist" McCauley informs. "You can be swaggy, outlandish, tough, serious, subtle, or reserved. You can be any of those things while still being proud of yourself and your identity. The USWNT does a better job of helping people feel that than any other mainstream, public-facing entity that I can think of. I hope the players understand how important they are."