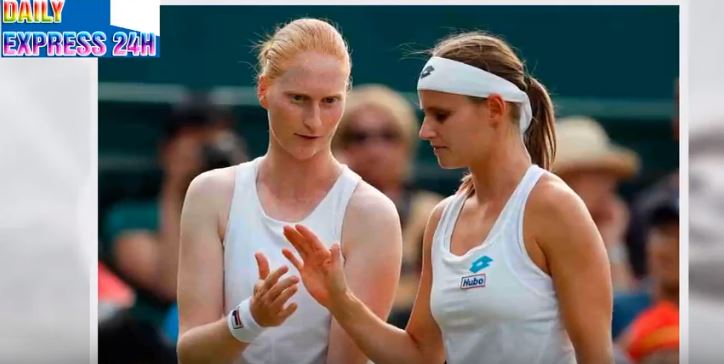 "The story" of Wimbledon so far has been 15-year-old Floridian Coco Gauff. Ranked 313th in the world, she is a wildcard entry who stunned her idol Venus Williams and also made an amazing comeback to defeat Polona Hercog. So who is Time magazine's Wimbledon coverage focusing on? Why, it's the history-making first lesbian couple playing together in the famed tournament!

And you thought you could escape from the LGBT-in-your-face media frenzy by switching the channel from the lesbian-dominated World Cup women's soccer tournament to Wimbledon tennis. No dice!

Belgians Alison van Uytvanck and Greet Minnen have been a couple for three years, but a few days ago they played together as a doubles team for the first time ever. Time writer Madeline Fitzgerald writes they "made history by being the first out gay couple to ever play together at the famed tennis tournament in London, England. The two were victorious over British players Katie Swann and Freya Christie on Wednesday."

The two also made headlines at Wimbledon last year when van Uytvanck defeated former Wimbledon champion Garbine Muguruza and "immediately headed to kiss her girlfriend in the stands," Fitzgerald recalls.

Charlie Eccleshare, of the Telegraph, called that "an image that would quickly be seen across the world, as Van Uytvanck and her girlfriend Greet Minnen defied the conventions of a still stuffy sport to openly express their love."

There's more Big LGBT news at Wimbledon, too, Fitzgerald reports. "In addition to van Uytvanck and Minnen, two other out gay women — Johanna Larsson of Sweden and Richel Hogenkamp of the Netherlands — competed in this year’s singles tournament."

Van Uytvanck raves about how “Women are coming out more easily than men. I hope we are something that people can look up to, like a role model to come out.”

Minnen says, “I just hope it will be even better in the next few years, and everyone can talk about it.”

With the compliance of the media being what it is, the two Belgians' sexual orientation easily overshadows their unremarkable ratings. In singles play, Van Uytcanck is ranked 59th in the world and Minnen is ranked 154th.

The media and the two Belgians certainly "get it" though. The Big LGBT agenda is obviously much more important than their sport. Who wants to stick to tennis anyway?

Fitzgerald wasn't done with her part to push the LGBT agenda yet either. She lists Billie Jean King and Martina Navratilova among the lesbian greats of tennis lore, along with the first trans player in tennis history, Richard Raskin/"Renee Richards." "And in 1976, transgender woman Renee Richards made history when she sued the US Tennis Association and won so she could compete in the Women’s U.S. Open."

Eccleshare says homosexuals in sport shouldn't even be a big deal. "The fact that a homosexual relationship is still 'a big deal' in tennis is at odds with the rest of society, and reflects the taboo nature of the topic within the sport. ... " Media allies of Big LGBT are certainly working to change that however.