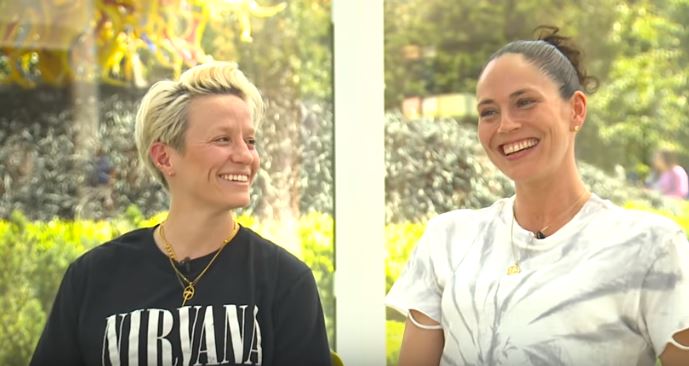 A photo of the radical protégé of Colin Kaepernick, pro soccer player Megan Rapinoe, is being hailed as the new version of the symbol she detests: the American flag. Courtesy of Robert Mayes, staff writer for The Ringer blog, who tweeted a photo of Rapinoe celebrating a goal at the World Cup slugged "the American flag now."

The Mayes tweet is linked in a story on The Players Journal blog by Seattle Storm Women's NBA player Sue Bird, Rapinoe's girlfriend. In her story, "So The President F***ing Hates My Girlfriend," Bird slammed President Trump for tweeting that Rapinoe should stop protesting the national anthem at the World Cup. Here's the Mayes tweet and Bird's reaction: 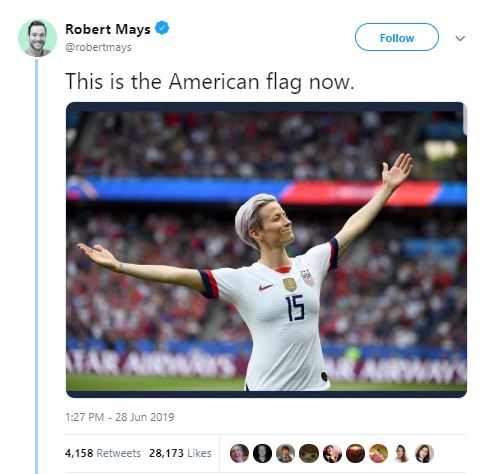 Bird (on the right in photograph with Rapinoe above) wrote: "This is the American flag now, someone tweeted -- and it's a photo of my girlfriend BEAMING ear to ear smiling her BOOBS off on a football field, mugging for the camera, weirdo dye job and all -- just totally and completely over-goddamn flowing with excellence? YES."

"What's it like to have the literal President of the literal United State (of literal America) go Full Adolescent Boy on your girlfriend?" asked Bird, who played collegiately on Connecticut's powerhouse basketball teams. "Hmm. Well ... it's WEIRD. And I'd say I actually had a pretty standard reaction ot it: which was to freak out a little."

Bird said Rapinoe's sensitivity drove her to fight for others and to take a knee (before the soccer federation outlawed kneeling). "All the threats, all the criticism, all the fallout — coming out on the other side of that is what makes her seem so unfazed by the assholes of the world now." Bird put President Trump in this category:

"I mean, some of it is kind of funny….. but like in a REALLY? REALLY? THIS GUY??? kind of way. Like, dude — there’s nothing better demanding your attention?? It would be ridiculous to the point of laughter, if it wasn’t so gross. (And if his legislations and policies weren’t ruining the lives of so many innocent people.) And then what’s legitimately scary, I guess, is like….. how it’s not just histweets. Because now suddenly you’ve got all these MAGA peeps getting hostile in your mentions. And you’ve got all these crazy blogs writing terrible things about this person you care so much about. And now they’re doing takedowns of Megan on Fox News, and who knows whatever else. It’s like an out-of-body experience, really — that’s how I’d describe it. That’s how it was for me."

Bird overlooked Trump's invitation to the U.S. women's soccer team to a White House celebration, win or lose, and she criticized him for never having invited a WNBA championship team to do the same. Bird also derided Trump for inviting the 2019 NCAA champion Baylor women's basketball team to the White House because Coach Kim Mulkey is white.

Prior to the World Cup, Rapinoe said that, as a giant "F-you" to the President, she would not respect the flag during pre-match playings of the national anthem. In an interview that didn't air until during the World Cup, she said she would never visit Trump's "fucking White House." This week, Rapinoe called herself "uniquely" and "extremely American," and said America was founded on slavery.

Rapinoe and Bird have bared much more than their emotions about President Trump and politics before. A year ago this libertine pair posed naked together for the ESPN Body Issue.