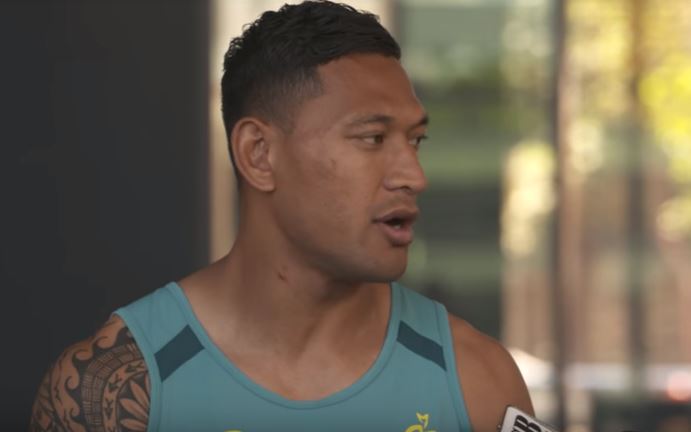 Ever wonder why professed Christian superstar athletes Russell Wilson and Stephen Curry go along with the politically correct progressive flow instead of holding true to the Christian worldview? That's because speaking openly about one's faith can be extremely hazardous to a Christian athlete's career, as Australian rugby player Israel Folau found out earlier this year. Especially minority Christian athletes. Folau was stripped of his $4 million contract for becoming, as the Saturday Paper reported, '‘the first athlete to be sanctioned for his religious views'’.

Yes, Curry puts money behind Christian-themed movies like Breakthrough, but when it comes to issues, the American athletes have opposed legislation designed to strengthen religious liberty and supported Barack Obama, the most pro-abortion president in U.S. history. As reported by Meanjin, a University of Melbourne-funded magazine in Australia focusing on the broader issues of the times, Folau Instagramed himself right out of a career by writing that homosexuals are bound for hell. The Meanjin story says the Tongan is also a victim of whiteness.

Ruby Hamad writes that Folau's response to a fan's Instagram question, "What are God’s plan’s for gay people?," caused widespread media outrage. Folau qualified his "hell" comment by explaining how people can repent of their sin, but Hamad's story skipped that part. 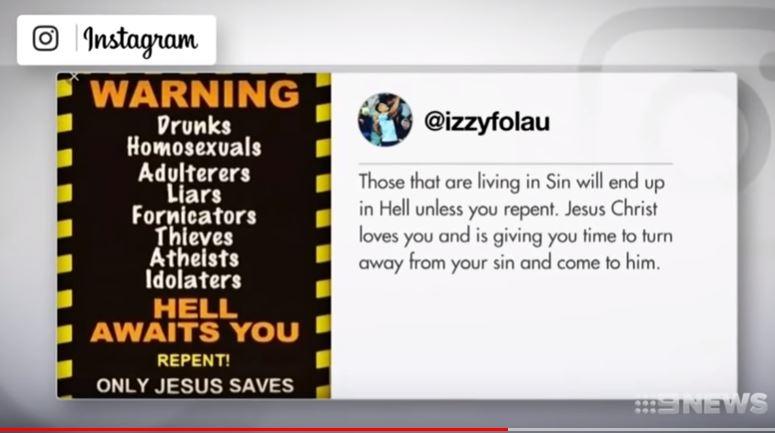 There is also a double standard in play, based on race, Hamad says. Australia seems to be enamored with selective enforcement for rules. Not to mention political correctness. Rugby Australia warned Folau that he had violated a commitment to diversity and inclusion, and he "was sacked from his $4 million contract. ..." Then, as a former rugby star, he taped a sermon on homosexuality in his father’s church that was posted on Facebook. The Daily Telegraph described it as, ‘'Israel targets gays, transgender children in latest sermon.’'

The Daily Telegraph and other media had previously supported the anti-trans and anti-marriage equality positions, Hamad says. But their about-face is a transfer of "all guilt on to people of colour so that white society retains its pure, clean and innocent self-image."

Retired tennis legend Margaret Court, a white conservative Christian pastor, has also spoken out against the LGBT, but he was portrayed by the media as attacking gay people and she for merely denouncing marriage equality, Hamad charges.

A homosexual writer, Samoan Patrick Thomsen, also claimed there's a race-based double standard. People’s "willingness to focus on burning Israel Folau at the stake represents the dominance of western thinking. One that posits that an individual is made by free will alone and is not a product of their community and environment as well," he wrote.

"It is the story of whiteness," Hamad says. "White society has been the global driving force behind, not only racism, but homophobia and transphobia, and yet, like racism––and indeed like sexual assault in the military which has been primarily committed by white soldiers––it somehow manages to find a way to ensure that others are sanctioned far more. Though a petition was circulated to have Margaret Court Arena renamed, it failed. The former tennis great has managed to keep her namesake stadium despite sharing the same exact views for which Folau is now being vilified.

"People of colour are expendable in our society. So too are LGBTIQ. What better way to ensure they both remain that way than by fomenting conditions that make it all but impossible for coalition-building between them? And so the cynical debates about Folau and free speech continue, while in the background power––white power––still reigns supreme."

Another omission from Hamad's story is the hypocritical statement in May by Rugby Australia chief executive Raelene Castle that her organization had no choice but to release Folau and it "supports the right to your own belief." Just not the beliefs of Christians.