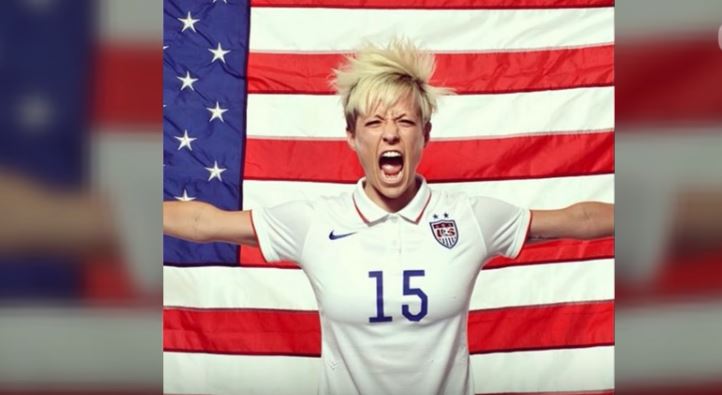 The Nation magazine's firebrand sports editor Dave Zirin has aggressively come to the defense of Megan Rapinoe, a lesbian member of the U.S. national women's soccer team who refused to sing the national anthem before a World Cup game Tuesday. He blasted right-wing "Christianists" who opposed her protest and slammed President Trump and Vice-president Pence for waging an anti-LGBT agenda.

Prior to Tuesday's 13-0 win by the U.S. national women's soccer team over Thailand, Rapinoe was the only team member who did not put her hand over her heart and sing the anthem. In a domestic league game three years ago, she had kneeled during the anthem as a show of support for Colin Kaepernick. Reaction to Tuesday's action by Rapinoe (in file photo above) drew considerable media attention.

The way Zirin tells it, "hate rolled down like waters" on Rapinoe. "Right-wing blogs breathlessly reported that Rapinoe did not in fact—heaven forfend—sing. Ham-faced twitter commenters and their egg counterparts were in a rage, shouting that if you don’t support the anthem you have no business on the national team. I would strongly bet that at least half of these folks are in the bathroom or on line at concessions when the anthem plays."

A reliable voice for left-wing media, Zirin praised Rapinoe and said she was right to abstain from singing the Star Spangled Banner. He acknowledged that the right wing "is in a lather" and is "sputtering anger" over this controversy and added, "I wish I were joking." Rapinoe's protest was inspirted by Kaepernick, who started a wave of anthem kneeling in 2016, but her sexual orientation also factors into her dissent.:

“Being a gay American, I know what it means to look at the flag and not have it protect all of your liberties. It was something small that I could do and something that I plan to keep doing in the future and hopefully spark some meaningful conversation around it.”

Rapinoe says a part of the privilege of representing America as a member of the national women's soccer team is "representing all of America.”

The Nation writer went on to say:

"Rapinoe’s rebellious posture has all the more weight given this administration’s attacks on LGBTQ community, from adoption, to citizenship, to even forbidding embassies around the world to fly a rainbow flag during Pride Week. In addition, they have to endure the daily presence of noted, unapologetic homophobe Mike Pence sitting at the controls of a Christianist agenda aimed at shoring up the last bastion of Trump’s support."

Zirin defends Rapinoe for using the platform of sports to express her protest and says she will continue to do so until the U.S. flag "actually serves to protect her rights as well as the rights of anyone who finds themselves betrayed by the gap between what this country purports to represent and all people’s actual lived experiences."