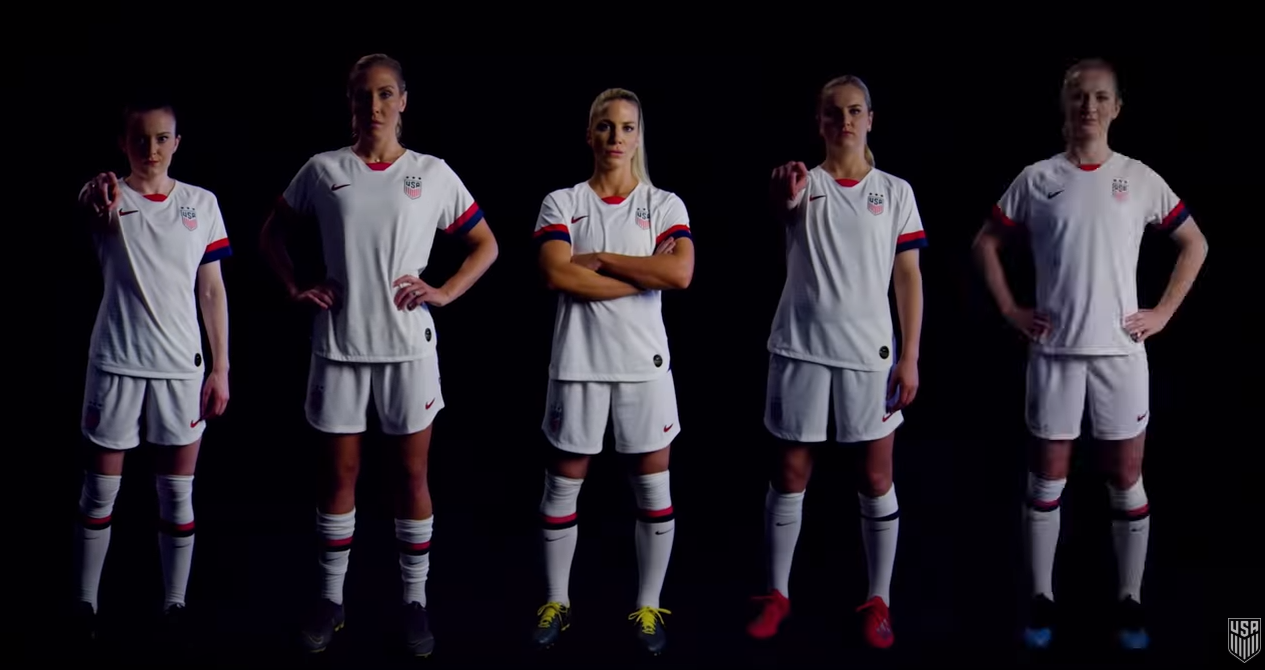 On Tuesday, Team USA women's soccer opens the defense of its 2015 World Cup title in a match against Thailand, but, as The Washington Post reports, the team has much more important things on its agenda. In fact, four team members are pushing for radical cultural change, and the whole team is suing U.S. Soccer for gender discrimination.

The Post's Jena McGregor reports that Re-Inc, the company started by Meghan Klingenberg, Megan Rapinoe, Tobin Heath and Christen Press, "is designed to be gender-neutral and highlight issues like equality and inclusivity."

Klingenberg says, "As women's players, we're always qualified—as I just did—as 'female athletes' and we wanted to be able to change the narrative." She said they want the freedom to fight for something instead of what our country wants us to represent and "we wanted to create our own value."

"The concept is being launched at a time when young consumers are more likely than ever to be aware of gender fluidity and less likely to categorize products as just for men or just for women. Cosmetics companies have been showcasing gender-neutral advertising in ad campaigns. A poll of millennials found that 50 percent believe the concept of gender is a spectrum. Millennials and Gen Z consumers increasingly expect gender-neutral advertising in the toy and fashion industries."

Re-Inc's founders hope the company will cash in on the success and popularity of the 2015 championship team, even if the team didn't experience pay equity four years ago. According to McGregor, they aim to create "an edgy lifestyle brand that will start with gender-neutral street wear and clothing that will eventually branch into products like wearable technology or wellness items like sunscreen. It's called Re-inc and is designed to be gender-neutral and highlight issues like equality and inclusivity."

The first product line to be marketed by Re-Inc includes beige t-shirts with no separate sizing for men and women. The shirts will feature the words " liberte", "egalite" or "defendez"—a play on the French motto. Klingenberg says they will create sizing that is more inclusive. Non-binary ways inclusive, that is.

In a previous story in the Post in late May, Steven Goff wrote the activist team has another purpose in France. It's to raise issues of equality within both U.S. circles and the soccer world. "The long runway to the tournament, however, has provided opportunity to discuss fairness and the future." The timing of their lawsuit was no coincidence, and the team is taking its grievances to "an increasingly attentive public."

Rapinoe, who earns a six-figure salary as a pro soccer player, carries the war on women theme in Goff's story, stating: "There is so much potential, so much untapped potential. I don't really understand why there is such a resistance toward going all in on women. It's pretty clear women in sports have not been treated with the same care and financing as men's sports have. No one is really arguing about that anymore. I don't understand why the action step is not there with it."

Rapinoe also complained that men's soccer has the gall to schedule two tournaments while the women's World Cup is ongoing. Apparently, equality requires the men's game to come to a complete standstill during the women's World Cup. She calls it "ridiculous and disappointing."

As we reported last summer, this team is heavily dominated by an LGBT influence. Ellis is married to a woman. The face of the national team in recent years has been lesbians Megan Rapinoe and Abby Wambach. The team has rainbow-themed uniform numbers, and a Christian hopeful of playing with the team last year, Jaelene Hinkle, was considered an undesired "heretic" to hostile media and fans.