The Nation Blisters Trump, Fox News, Along With LeBron James 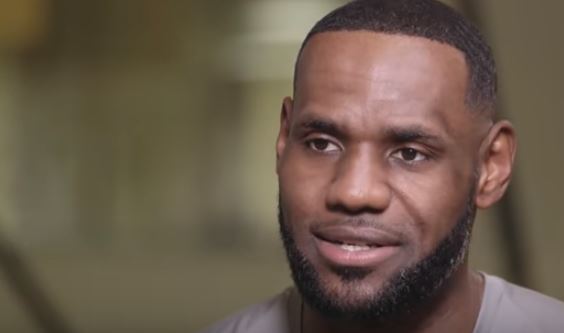 While criticizing LeBron James for teaming up with Walmart to fight hunger, The Nation magazine's sports editor Dave Zirin labeled President Donald Trump and Fox News racists. He called James a heroic athlete-activist who's done great things, but says Walmart is exacerbating the problems of hunger and poverty.

James' commitment to "using his platform for the greater good is damn near beyond reproach," Zirin says. He's practically a legend for organizing his former Miami Heat teammates to wear hoodies to honor Trayvon Martin back in 2012. .

James further leveraged his "mighty cultural capital to be more than an athlete" by heroically wearing an "I Can't Breathe" t-shirt to protest the police killing of Eric Garner in Staten Island in 2014. He's also spoken in support of Black Lives Matter.

"LeBron has also challenged everyone from Donald Trump to the hacks on Fox News for their racism and venality," said Zirin, who has attacked Trump frequently. "He has put his money where his politics are, even starting an educational institute for at-risk youth, the I Promise public school in his hometown of Akron, Ohio."

In addition to supporting the t-shirt and hoodie industries, James socked it to Fox News' Laura Ingraham by producing a documentary series on social justice activism last year. After she told him to "shut up and dribble" when he criticized Trump in 2018, he titled the series by using her phrase. Further growing his legend as an athlete-activist.

Zirin complained, "The basketball superstar is trying to fight food insecurity alongside a corporation that aggravates that very problem." Walmart has long been under attack from leftists, for a host of beefs.

In partnering with Walmart to provide for food-deprived families, James announced he is the spokesman for the Fight Hunger/Spark Change campaign. He recorded a video with Walmart CEO Doug McMillon to promote the effort.

Zirin spoke to economic justice agitators Cyndi Murray and Michael Blain, who accused Walmart of contributing to poverty and food insecurity. Murray said, “If Walmart wants to get serious about hunger, they should pay a living wage. Hard stop. Walmart is the largest corporate employer in the US, but over half of the associates are food insecure. ... LeBron ain’t going to fix Wal-Mart's image problem. Paying us a living wage would be a good start.”

Blain criticized Walmart's labor practices in the film he co-directed, Dear Walmart. He'd like to tell James that Walmart workers and their families are the leading recipients of public assistance, including food stamps, because it doesn't pay them enough. "LeBron, your partnership with Walmart on this issue would be far more effective, and directly help more children, if you also called on Walmart to pay all its hourly employees a living wage, so they don’t have to depend on food banks and nonprofits like Feeding America for food assistance in the first place.”

Getting back to race-baiting, Zirin also torched Walmart because it denied employment to African-Americans who failed criminal background checks.

Zirin said that James has broken out of the "box" that confines athletes to sports and is “more than an athlete. He wants this power and he wants this weight. With that weight will invariably come criticism, especially when choosing to swim with sharks like Walmart. Here’s hoping LeBron hears these voices and acts accordingly."