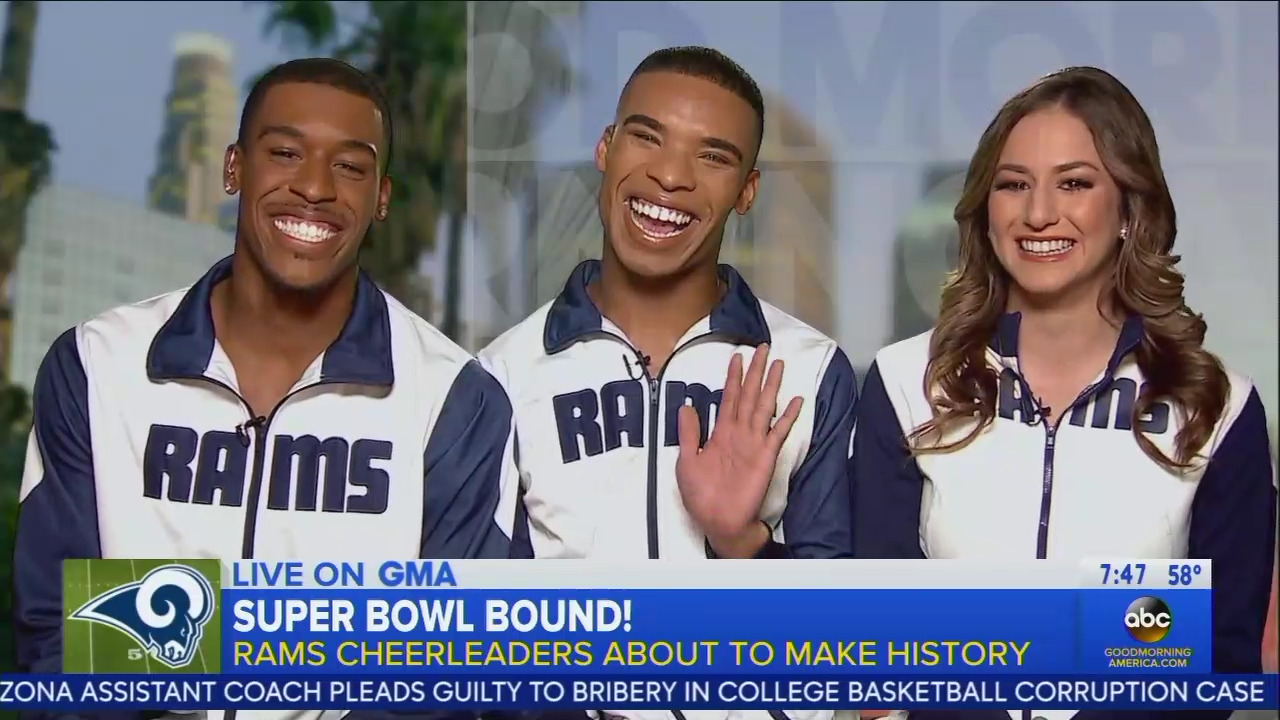 There's nothing like history in the making that also makes a statement against the scourge of toxic masculinity. It doesn't require a big, expensive Gillette-style ad campaign, either. It's the inclusion of male cheerleaders in the formerly all-female world of NFL cheerleading. And when the Los Angeles Rams take the field Feb. 3 for Super Bowl 53, two men will be there with them as members of the cheerleading squad.

Quinton Peron and Napoleon Jinnies, the first male Super Bowl cheerleaders, made their second appearance on Good Morning America Thursday with captain Emily Leibert. They called their upcoming Super Bowl performance a “fairytale.” Leibert called them "extraordinary trailblazers" and "totally normal teammates" who "fit right in" with the women.

For their part, Peron and Jinnies foresee what could become the anti-dote to toxic masculinity; they predict more and more males will become cheerleaders, from children on up: "We've been reached out to by so many men that are so excited to try out, not just men our age but young men trying out for the junior high school dance team or cheer team, high schools, and it's exciting to see the tide change a little bit."

Hornet, "the digital home for the LGBTQ+ community," reported in March that both men are gay. SB Nation Outsports, another LGBT blog, revealed that their fellow trailblazer, Saints' cheerguy Jesse Hernandez is also gay. At least one other NFL team (the Baltimore Ravens) has men on their cheerleading stunt team, but these three actually perform all the same dance routines with the women.

Celebrating the history in the making that contributes to the feminization of the American male, the New York Daily News' Carron J. Phillips says, "Cheerfulness has no gender."

This effeminate form of masculinity is set against the backdrop of Gillette's disastrously unpopular toxic masculinity campaign, "brimming with PC condescension," as NewsBusters' Gabriel Hays puts it. Gillette will air its “We believe: The Best Men Can Be” ad during the Super Bowl broadcast on CBS, which is expected to rake in more than $5 million per half-minute television advertisement.

Gillette's commercial shows males at their worst, men sexually harassing women and boys bullying kids. It asks, "Is this the best we can be?" A blog called The Conversation said this bad male behavior has been normalized in the workplace, relationships and TV shows. And Gillette's campaign is extraordinarily unpopular:

The commercial is on track to becoming one of the most disliked ever: a week after Gillette posted it on YouTube, it had more than 24 million views, 1.1 million dislikes and 658,000 likes. In facing its own perhaps complicit past in perpetuating damaging gender stereotypes in its advertising, Gillette has offered a behaviour-change challenge to men. It is a tactic that has instead made male consumers feel attacked, victimized and angry.

This "my bad" Gillette ad is not the aspirational story typically told in advertising, The Conversation related:

Instead, the Gillette ad enters a man’s personal space, without his permission, and forces him to face his masculinity head-on. Gillette tells men that "something finally changed" as it flashes a clip of a newscaster speaking of "allegations of sexual harassment." The ad imposes an inescapable self-reflection into their daily routine saying, "you can’t hide from it” anymore.

Figuratively swimming upstream against the roaring rapids of public contempt for Gillette, The Conversation article ended with this: "A daily reflection and assessment of one’s attitudes connected to the cultural shift which #MeToo has helped to bring about might be a good start, 'because the boys watching today will be the men of tomorrow' and they will inevitably need a close shave.'"

Or a tryout with the school cheerleading team.