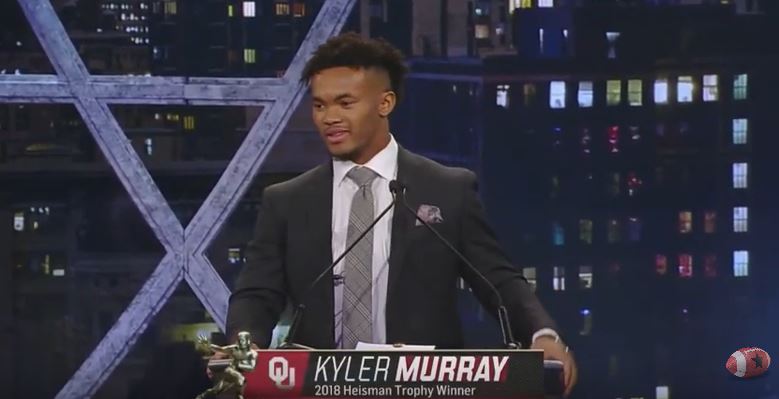 Oklahoma University's superstar quarterback Kyler Murray won the Heisman Trophy on Saturday night, but by Sunday he was being shamed by the media for something that has absolutely nothing to do with his incredible 2018 football season. Instead, Murray became just the latest high-profile athlete to be busted by social media "cops" in the sports media exposing anyone who has written "anti-gay slurs" in their youth.

You won't find a single one of Murray's impressive stats (51 total touchdowns and nearly 5,000 all-purpose yards) in Sunday's USA Today story by Scott Gleeson, who's focused much of his career writing on LGBT issues.

Gleeson tackles Murray "for homophobic tweets that resurfaced after he won Heisman Trophy." Murray has apologized for what he wrote on social media six years ago, apparently calling a friend "a queer," when he was just 15. Now he's joined a growing list of athletes attacked by the media for similar "thought crimes" as a youth.

This year alone, Josh Allen of the Buffalo Bills, Josh Hader of the Milwaukee Brewers, Michael Kopech of the Chicago White Sox, the Washington Nationals' Trea Turner and the Atlanta Braves' Sean Newcomb have all been pilloried by USA Today writers (Bob Nightengale, Lorenzo Reyes, Erik Brady and Steve Gardner) and other media for what they wrote on social media long ago as kids.

After media-wide attention on his past social media, Murray tweeted: "I apologize for the tweets that have come to light tonight from when I was 14 and 15. I used a poor choice of word that doesn't reflect who I am or what I believe. I did not intend to single out any individual or group."

Not only did Gleeson go after Murray for insensitive language in a tweet, but he also "inquired" with the University of Oklahoma for a comment on Murray's transgression. Hoping the university would dish out punishment for the Heisman Trophy winner, perhaps? Gleeson has a history of seeking punishment for universities who cross the LGBT community and its agenda.

Obsessed with the LGBT agenda to search and destroy adult athletes for youthful remarks, Gleeson has previously criticized religiously affiliated colleges "that see homosexuality as a sin — and that have codes of conduct banning same-sex relations. Freedom of religion allows such schools to operate under their own precepts and beliefs, but gay rights advocates say that doesn’t mean the NCAA must allow membership to schools that enforce these kinds of codes."

The USA Today agenda journalist also wrote about how more than 80 LGBT organizations "wrote a letter to the NCAA urging it to divest membership of religiously affiliated schools that ask for such waivers. 'These requests,' the letter said, 'are directly in conflict with the NCAA’s longstanding commitment to diversity and inclusion for all people regardless of sexual orientation and gender identity.'”

While Murray may have a promising career ahead of him in pro football, he was already drafted by the Oakland Athletics baseball team and will report to spring training with that organization next year. No matter where he plays in the future as a professional athlete, it's not likely the progressive media will let him escape the "homophobic" taint.