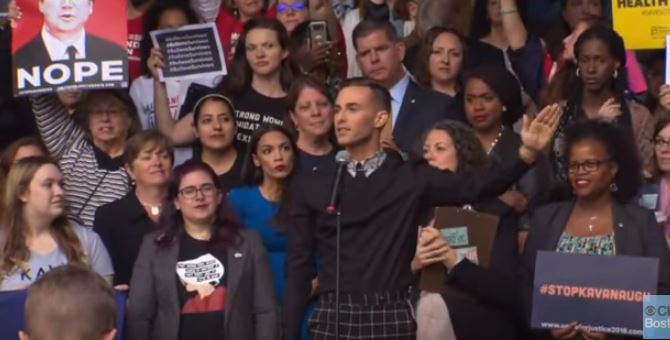 A few days ago, USA Today News & Enterprise Reporter Scott Gleeson made a list of 12 athletes "who would make great politicians." The reasons given for the athletes' political qualifications are in some instances thin to say the least.

Not surprisingly, the vast majority of them are progressives, headed up by the Los Angeles Lakers' LeBron James and including the Eagles' Malcolm Jenkins, NBA coaches Steve Kerr and Gregg Popovich and former Olympic skater Adam Rippon (see photo). Tim Tebow made the list, but as a Christian pro-lifer he's in the minority.

Gleeson places James right at the top of his list:

"In honor of Election Day, here are 12 sports figures who could excel running political campaigns and governing the people. ...

"The Los Angeles Lakers forward and part-time TV producer was politically active long before he came to Hollywood, where his voice can be heard even louder."

Supposedly James is qualified to govern people because he speaks up on issues of racial inequality, "used his platform to press for change with the Trayvon Martin case, the Donald Sterling racism saga, the Michael Brown verdict and the death of Eric Garner. That's carried over into his television career where he's co-produced the sports and politics documentary 'Shut Up and Dribble.'"

San Antonio Spurs' basketball coach Gregg Popovich is qualified to lead people because he "has always had a fascination with politics." What's more is that a friend, Pomona-Pitzer College history professor Steven Koblik, says Popovich could "talk books or international affairs or the (Ronald) Reagan White House for hours." Popovich "would have the ability to reach diverse crowds as a politician, as he's often been outspoken about gender and racial equality, LGBT rights and shown an ability to fight for the disenfranchised."

Another liberal NBA coach deserves consideration, too. Golden State's Steve Kerr is qualified because he "has used his platform to voice his displeasure with the current White House." Kerr is an advocate of gun control as well, which puts him on the Democrats' radar.

Though tennis star Serena Williams grew up Jehovah's Witness, a religion calling followers to remain politically neutral, "Her off-the-court endeavors speak volumes and her outspoken personality to stand up for what she believes in has garnered her millions of fans. In conjunction with her diverse charity work, Williams is also a fashion icon who embraces her identity as a new mom." Gleeson may be onto something with the fashion-politics connection.

Tim Tebow remains prominent and he once "starred in an anti-abortion" (not to be confused with being pro-life) Super Bowl commercial. In 2010, he told The New Yorker he would be interested in a political role: “It’s something I could imagine. I want to do whatever I feel can have the greatest impact and touch the most people. If one day that is the political realm, then that’s something I’d consider. I wouldn’t be doing it out of a passion for politics but out of a passion for people.”

Count Jenkins in Gleeson's exclusive future politicos' club. His bona fides include raising his fist at the American flag "as a vehicle for social change ... " and meeting with congressmen to discuss prison reform.

At this year's Winter Olympics in South Korea, the media had a swoon-fest over U.S. skater Adam Rippon for two reasons: 1) he's gay; and 2) he played the bigot card on Republican Vice-president Mike Pence. Now there are two strong qualifications for public office!

At a political rally in Boston last month, Rippon said: "I've always thought one day I would run for office." He also called then-Supreme Court nominee Brett Kavanaugh “unfit, unaware, and unqualified. Simply put, we do not need two sexual predators on our Supreme Court. It’s time to disqualify Brett Kavanaugh and to move on. Senator Flake, vote no!”