Jemele Hill has talked, tweeted and finally bought her way out of ESPN. The bombastic race baiter who last year called President Donald Trump and his supporters "white supremacists" has bought out her remaining contract, reports The Sporting News' Jenna West:

"ESPN personality Jemele Hill will reportedly leave the network at the beginning of September, according to noted author and media reporter James Miller.

"Hill's reported departure is said to be 'amicable' and includes a buyout. The move comes after she requested a meeting with ESPN president Jimmy Pitaro, per Miller, the author of Those Guys Have All the Fun: Inside the World of ESPN."

The Sporting News described the parting as a "separation":

"The former 'SportsCenter' anchor will accept a buyout of the remainder of her contract with the network, said sources. Hill’s deal with ESPN still has at least two years to run and she stands to walk away with millions of dollars from ESPN parent Disney while she pursues other career opportunities, sources said."

"Jemele Hill let her fingers doing the talking Sunday on Twitter, hours after news broke of her upcoming exit from ESPN.

"As followers quickly celebrated or mourned Hill’s departure from the Worldwide Leader — her last day is Friday, The Post’s Andrew Marchand reported, as the network is buying her out — the former 'SportsCenter' host summed it all up by posting a gif of a dumpster fire, writing, “Live look at my mentions.” 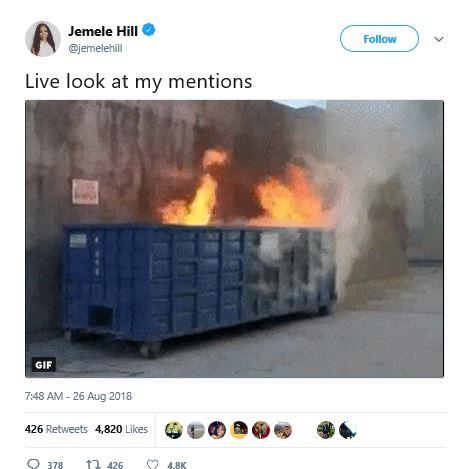 Hill also sparred with the writer of one tweet who claimed she was too political, denying the claim.

Hendricks called Hill "perhaps ESPN’s most divisive figure and the face of one of its most divisive shows in 'SC6,' which was a more opinionated version of 'SportsCenter.'”

In defense of the firebrand Hill, Deadspin's Chris Thompson poured out all his wrath and venom on ESPN, Trump and Hill's critics:

"Hill ran afoul of ESPN’s constitutional cowardice at least twice in the last year, and that was before Pitaro showed his belly to NFL owners and MAGA chuds on Monday."

Thompson was referring to Pitaro's recent statement that ESPN is not political and that the network will not air the national anthem during Monday Night Football games this season. Thompson also wrote that Hill's "white supremacist" tweet "about our senile amoral grifter of a President" was true. "She remains deeply unpopular with both the 'stick to sports' crowd and the “black people are the real racists” crowd ... He added that her departure will be met by relief from NFL owners and huzzahs and "the very worst people on earth. Hopefully she’ll find her way to a role with a company that hasn’t dedicated itself to courting favor with those two hideous groups of people."

The Sporting News' Michael McCarthy wrote of Hill: "Hill's supporters inside and outside ESPN saluted her as a fearless journalist and truthteller." And conservatives said she should have been fired last year by the network that previously fired Curt Schilling for disagreeing with his social media comments.

Hill began working at ESPN in 2006 as a writer. More recently she and Michael Smith co-hosted the "His and Hers" program which vaulted them into greater limelight as hosts of SportsCenter 6. It was while she was working SC6 that Hill issued her infamous tweet blast at President Trump:

The backlash was fierce, and Sarah Huckabee Sanders, White House press secretary, called for Hill's firing. ESPN did not punish Hill then, but two weeks later the network suspended her after she called on sponsors of the Dallas Cowboys to pull their advertising. She was enraged that Cowboys' owner Jerry Jones demanded his players stand at attention for the national anthem.

Earlier this year Hill left ESPN to serve as a writer for its black-themed blog, The Undefeated. During those few months, her writing contributions to the site were minimal. And in July she said in a speech in New York that she was planning to leave ESPN soon and begin producing videos on race and gender.