USA Today: Oppose NFL Protests? You and Trump are Fascists and Clowns 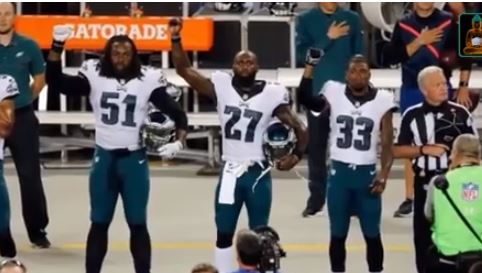 So much for the land of the free! We who oppose protest in sports (see file photo of Philadelphia Eagles' protesters) are really "fascists" and should think about moving to a backwards nation, writes USA Today's Brent Schrotenboer. Furthermore, the man in the White House is engaged in a "fascist frenzy." Standing for the national anthem is indicative of a fascist political philosophy that “exalts nation and often race above the individual," and is symbolic of "a centralized autocratic government headed by a dictatorial leader, severe economic and social regimentation, and forcible suppression of opposition.”

Schrotenboer urges people to ignore President Donald Trump's tweets discouraging NFL protests. "Let a clown be a clown, if he’s got nothing better to do. Ignore the president’s tweets, as some NFL players recently have suggested. Don’t pay any attention to his fabricated, fascist outrage." The writer also says:

"Rise above it and let the players and the fans – and even other owners – do what they want individually during the song about bombs bursting in air.

"If some players want to kneel or raise their fists in protest of social injustice, support them.

"If some fans want to stand and sing along with their hands over their hearts, support them, too."

Schrotenboer called Jerry Jones, owner of Dallas Cowboys, a hypocrite for demanding his players stand for the anthem when he doesn't remove his hat for the Star Spangled Banner.

There's nothing special about the anthem, the USAT writer continues. It's just a song and the flag is just a piece of cloth, symbols of a great country. But "The real composition and fabric of this country are the values it actually stands for – including that we are free to tune out a pro-wrestling-style rabble-rouser who implies we all should behave in proper unison during these musical rituals even though he sometimes has appeared to not know the words to such songs himself."

Anyone "weak-minded enough to be triggered by individual players kneeling in protest here" is welcome to move to one of the many backward countries "where citizens can be prosecuted if they offend their government's leaders — or if they don't dress or stand in conformity."

And for the trillionth time, African-American players are not protesting the national anthem itself, Schrotenboer rails. They're not disrespecting the military or the police (even though the man who started unrest in the NFL, Colin Kaepernick, has frequently attacked America and police).

"These players instead are bringing their own symbolic gestures to these symbolic platforms – in an effort to call attention to problems that attack the very values symbolized by the song," Schrotenboer complains.

He defends the social justice warrior athletes as "public figures who perform on giant public stages and now take the brunt of regular public interference by the head of the government himself.":

"And don’t fall for the false choice between “patriotism” and players who protest. You can support American values and military veterans and players who are protesting inequality.

"You also can support police and those who want to shine a light on police killings of unarmed civilians.

"It’s more patriotic to support all of the above."

Responding to President Trump's recent tweet calling on NFL players to stand proudly for the anthem or be suspended without pay, Schrotenboer urges the protesters to "Ignore him proudly. Civilians in other countries have to heed such instructions. Not here."

Protests have continued in the NFL this week. Miami's Albert Wilson kneeled and teammate Robert Quinn raised a fist in defiance. Philadelphia's Michael Bennett, Harold Jenkins and De'Vante Bausby refused to take the field for the anthem. So far they have not been "forcibly suppressed."