WashPost's Jenkins: Protests Enrage Fans Because It's a Denial of American Exceptionalism 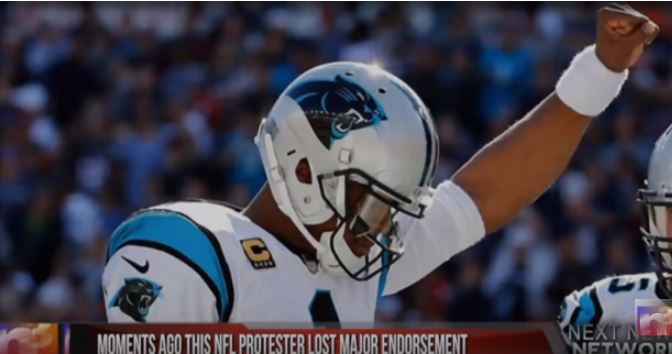 Setting out to determine why NFL kneeling protests create so much outrage, The Washington Post's sports columnist Sally Jenkins concludes that it comes down to fan anger over a denial of American exceptionalism.

Opening her examination of the controversy, Jenkins says the various NFL factions must understand "why the controversy burned so hot in the first place. Billionaire owners and players alike have been dumbfounded and tin-eared, failing to comprehend how a protest involving just 12 percent of players seeking to comment mildly on racial injustices has swamped the league and alienated a large chunk of the audience." Just last week sports media told us the NFL's TV revenues proved the audience had not been alienated.

And, Jenkins writes, lest you get side-tracked by the question of who is the truer American, set aside the notion that the protesters (see photo of Panthers' Cam Newton protesting the anthem) are the thinking, reading men on the field and the president is the unthinking one who's ready to exile anyone who disagrees with him:

"To their credit, Commissioner Roger Goodell and the NFL players’ union have decided they won’t be dictated to by Donald Trump. 'Thanks for your thoughts, but we’ll take it from here,' player representative Eric Winston tweeted in reply to the president’s demand that any player who doesn’t stand at attention with hand over his heart during the anthem be suspended. Instead NFL owners and players will try to agree on a new policy in confidential meetings."

Now that Jenkins and the protesters she adores have been determined superior to her straw man in the Oval Office, Jenkins embarks down history lane to describe how football fans have taken us to where she doesn't want us to be in 2018.

"The volatile marriage of patriotism and football is as old as the sport," Jenkins writes. The rise of the game closely followed the American frontier wars ... . The game steadily grew in the 1890s after Frederick Jackson Turner declared the frontier officially vanished. Football was a reaction to the fear that American men, with nothing left to conquer once the primal wilderness was gone, might become neurasthenic and over civilized." (It's uncertain how these small-brained neanderthals could measure out a 100-yard field.)

And that is the root of North Carolina football coach Larry Fedora's recent statement that if football goes, “the country goes down, too.” American football "always has been a game of clout," "about taking possession by moving others out of the way." At its heart is what Teddy Roosevelt described as “a righteous ruthlessness.”

Jenkins quoted Pastor Tim Suttle, a social justice advocate from Olathe, Kan., who surveyed history and described football as “sport as the liturgy of empire.” He attended a game at Kansas State and realized that the reverence of the Pledge of Allegiance and singing of the national anthem had all the elements of a church service. (There are concession stands, two-minute warnings, official reviews and halftimes at church services?)

"The ceremony and the game embody the belief that this nation stands above all other nations as more powerful, virtuous, righteous, and more justified in our actions, even our most violent ones,” Suttle said. Football is a brand of civil religion and many Americans think it’s more important to attend a game on Sunday than to go to church.

Jenkins chimes in: "Look at the anthem controversy in this light, and you can see why taking a knee so upsets a large segment of the audience: because it’s a denial of American exceptionalism." And there "is no explaining to those offended that the protesters don’t mean to insult the flag but merely to comment on social injustice." Football is a righteous ruthlessness and as football goes, so goes the country. This is all so ironic because the NFL's brand of civil religion "serves to highlight just how un-Christian this nation can be on a Sabbath."

The entire NFL debate is "about a profoundly misplaced emphasis. Enforced patriotism, of course, is not patriotism at all. Regardless of love of country or religious persuasion, surely we all have something better to do than argue over a false, commoditized civil religion that has hijacked peaceful Sundays and days of rest."

Peaceful Sundays? With football players on their knees, standing with raised fists, calling cops "pigs" and "slave catchers"? Aiming their protests directly at the flag — and by extension at our veterans — instead of directly protesting the institutions they say they oppose?