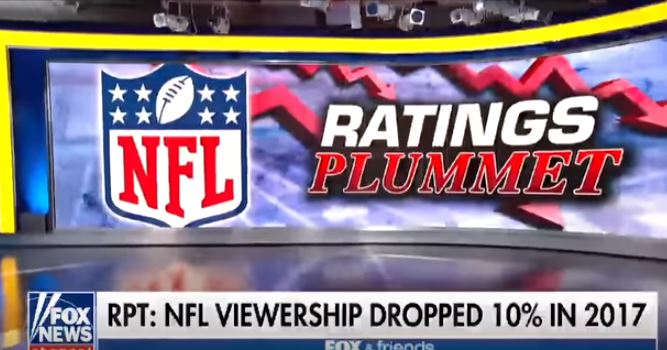 Sports media reports today are gloating that increases in NFL revenues dispel claims that national anthem protests are hurting the league's bottom line. Some of them are not telling the full story either.

"(A)n article published this morning by ESPN reporter Darren Rovell indicates that NFL league-wide revenues actually increased by 4.9% during the 2017 season — even with the president of the United States, in a barrage of tweets, calling for protesting NFL players to be 'fired.' Rovell's article thus calls into doubt the purported link between NFL players' political activism and fan support for the league overall."

Edelman also argues that the NFL's change in policy requiring on-field players to respect the national anthem demonstrates the league's new rule "was not sincerely about trying to protect the league's financial value." He goes on to write that the NFL's attempts to suppress protest were "increasingly misplaced. Ending NFL player protests is probably not a matter that truly has great financial urgency."

"National revenue comes from a variety of sources, including the league's TV deals with NBC, CBS, FOX, ESPN and DirecTV, as well as licensing and merchandise revenues. The television contracts make up most of that total revenue."

The NFL wasn't getting its bang for those bucks either. Despite the increased TV revenues, fewer people were watching the networks that bought NFL broadcasting rights.

Thus the major reason for increased NFL revenues comes from television network broadcasting rights negotiated prior to the season and has nothing to do with fan opposition to protests. UPI's report also acknowledged declining TV ratings, a significant indicator of growing disapproval of the league.

Chris Thompson, the Deadspin blogger, crowed about protest opposition not making a serious dent in the NFL's bottom line:

"Amid all the hand-wringing and propagandizing over the damage done to the NFL’s popularity by player protests during pregame national anthem ceremonies, the important available numbers continue to paint a picture of a league that is invulnerable to controversy."

Thompson mentions the television network money, but still fails to make the distinction that it's an apple and fan disgust with protests is an orange. He ended by taking a vulgar shot at anyone who would assert the protests are hurting the NFL:

"This will of course not discourage any deeply senile wannabe dictators from fucking this particular chicken until it’s just a pile of gooey red feathers, but it should serve to remind the rest of us that no amount of alarming brain injuries or chewed-up ex-players or off-field controversy or heavy-handed disciplinary craziness or pregame activism has yet done anything to meaningfully penetrate the NFL’s stranglehold on the collective American attention span every fall and winter Sunday. The NFL is unstoppable."

The NFL isn't convinced of that. League owners and officials heard the booing last year every time social justice warriors disrespected the flag. They are understandably worried about the 9.7-percent loss in television viewership for the 2017 regular season.