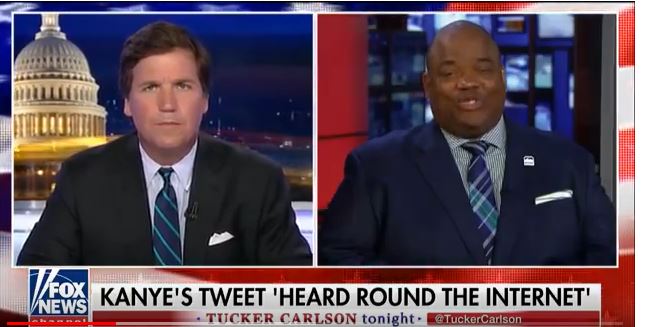 Jason Whitlock, co-host of the Fox Sports 1 program Speak for Yourself, is defending Kanye West from attacks by African-Americans and media for his favorable tweets on President Donald Trump. Whitlock did so in a Wall Street Journal commentary and on an appearance with Tucker Carlson on Fox News Tuesday night, in which he also criticized African-Americans for religiously supporting Democrats.

Here's the West tweet that stirred up a hornet's nest:

The reaction by liberals to those remarks, Carlson said, was like a bomb going off. Whitlock called it one of the best tweets of all-time and also said "it's being tamped down as viciously as anything I've ever seen." Vox referred to West's tweet as "startling, and it upset Rep. Maxine Waters, singer John Legend, and other high-profile African-Americans.

President Trump appreciated West's remarks, and Whitlock wrote in the WSJ the comments "constituted left-wing betrayal of the highest order. The man who once vilified George W. Bush for the slow response to Hurricane Katrina was joining the birther president?" West's remarks could "devastate the Democratic Party," Whitlock said, adding:

"Liberalism is black people’s cigarette. In the immediate aftermath of the civil-rights movement, Democrats marketed liberalism to us as fashionable, sophisticated and liberating. Today it needs a surgeon general’s warning: hazardous to your family and the values you were taught as a child."

Whitlock says the assassination of Dr. Martin Luther King "created an acute leadership void in black America. The Democratic Party capitalized by promising black people government dependency disguised as assistance. The welfare check, the replacement for black fathers, is liberalism’s nicotine. Hollywood celebrities were once deployed by advertising companies to make smoking seem cool; today, they are deployed by liberal interest groups to make progressive politics seem like the only solution to black people’s problems.

"Since King’s death, liberalism has increasingly become our religion and the Democratic Party our church. The rewards for our allegiance are at best disappointing: Our families have disintegrated. Our men have been incarcerated and emasculated. Our communities have been abandoned by high achievers. And our children are confused and resentful of their elders."

On April 18 West tweeted: “Don’t follow crowds. Follow the innate feelings inside of you. Do what you feel not what you think. Thoughts have been placed in our heads to make everyone assimilate. Follow what you feel.”

Five days later he tweeted “new ideas will no longer be condemned by the masses. We are on the frontier of massive change. Starting from breaking out of our mental prisons.” To which Whitlock writes on WSJ:

"(M)aybe we, African-Americans, have chosen the wrong strategy. No other ethnic group is chained to a single political ideology. Hispanics, whites and Asians actually make political parties compete for their support. Maybe Mr. West is trying to warn us of the dangers of Democratic cigarette addiction?"

In his conversation with Carlson, Whitlock said:

"I think us as African-Americans, we have to examine why are we the only ethnic group that has gone in wholly with one political party? No one has to compete for our votes. We are chained to an ideology that just isn't working over the last 50, 60 years. Liberalism, the swallowing of a whole. Our families have been destroyed destroyed. Our children lost and confused."