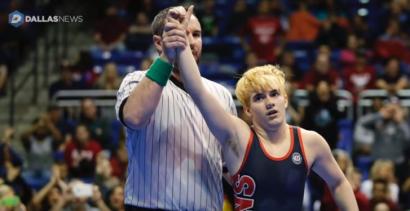 In this crazy world of boys who will be girls and girls who will be boys, Mackenzie "Mack" Beggs is back in the news again. "He" repeated this weekend as a Texas state champion in the girls' Class 6A 110-pound wrestling division. Confused? Of course you are. Beggs, a high school senior girl in Texas undergoing testosterone treatments because she wants to be a member of the boys' wrestling team, is again being touted by liberal media pushing the transgender agenda.

The mean old Neanderthals running Texas high school sports are forcing Beggs to wrestle as a girl – her birth gender, against her will. That's unacceptable to the LGBT folks and their media lapdogs. ESPN W (a women's blog and dependable LGBT ally), the Associated Press and the Dallas Morning News are among Beggs' biggest cheerleaders. They refuse to refer to her as a girl throughout the entirety of their stories. This story commanded much more national attention last year when it didn't have to compete with Olympic coverage.

The ESPN W story, with AP contributions, reports Beggs is in the process of transitioning from female to male and taking a low dose of testosterone. No wonder she has a 92-0 record against girls in the past two seasons. "It was his steroid therapy treatments while wrestling girls that stirred a fierce debate about competitive fairness and transgender rights last season. It has been a lot quieter since last year, when his march to a state championship was dogged by a last-minute lawsuit that tried to stop him." Also this:

"He has so much respect for all the girls he wrestles," said Beggs' mother, Angela McNew. "People think Mack has been beating up on girls. ... The girls he wrestles with, they are tough. It has more to do with skill and discipline than strength.

"I can tell the state Legislature to change the policy, but I can't tell them to change it right now," Beggs said. "All I can hope for is that they come to their [senses] and realize this is stupid and we should change the policies to conform to other people in my position."

Kayla Fitts, who lost to Beggs in the semifinals, complained it was unfair for her to have to wrestle someone who identifies as a boy. The Morning News' Brad Townsend's story quoted Fitts saying, "The strength definitely was the difference. I didn't anticipate how strong he was."

The Morning News also reported on the narrow-mindedness of those who agree with Fitts:

"But if Euless Trinity transgender wrestler Beggs thought his Class 6A 110-pound girls title victory on Saturday would be more universally understood, respected and embraced than last year's, he was in for disappointment.

"A piercing cascade of cheers and boos enveloped Beggs at the end of the match, the last of his high school career. He responded by repeatedly tapping his chest and turning in a circle so that every soul in the Berry Center, pro and con, could see him."

This Tarzan imitation could earn Beggs special recognition at the 2018 ESPY's, though Colin Kaepernick most likely has the Arthur Ashe Award for Courage sewn up.

The Morning News' Townsend went further with the agenda: "When Beggs was thrust into the national spotlight last year and soon after became an outspoken advocate for transgender rights, his and his family's hope was that his story would inspire other transgender kids, athletes and otherwise."

Townsend reported that a Los Angeles production company is working on a documentary about Mack and other transgender high school kids. "The documentary, tentatively scheduled to be released in 2019, is meant to be an educational tool for transgender kids and their parents. That might well help families around the country." Instead of alerting families to the long-term psychological and physical dangers of adopting gender-changing identity, the media cited are using them to champion the LGBT agenda.

Townsend said Saturday's repeat state championship closes one chapter for Beggs, who's setting her sights on a future wrestling career as a "male." An undisclosed college has promised her an academic scholarship and an opportunity to be a member of the men's wrestling team. "USA Wresting and NCAA rules require that, and besides, that is what he wants to do. ... My focus is now to go not just NCAA, but train for the Olympics, 2020 and 2024," he said.

That's an ambitious goal for a girl who desires to be a male college and Olympic wrestler. But she won't be facing Kayla Fitts from here on out. She could go winless in her future college wrestling career, but the left-stream media will hail her as a pioneering hero. Her story just might inspire a movie about a transgender wrestler winning an Olympic gold medal.