When a major social issues brouhaha recently erupted in Texas, it was all too predictable that Big Media would push hard in support of its LGBT activist friends. The big T – for transgender – in this case. 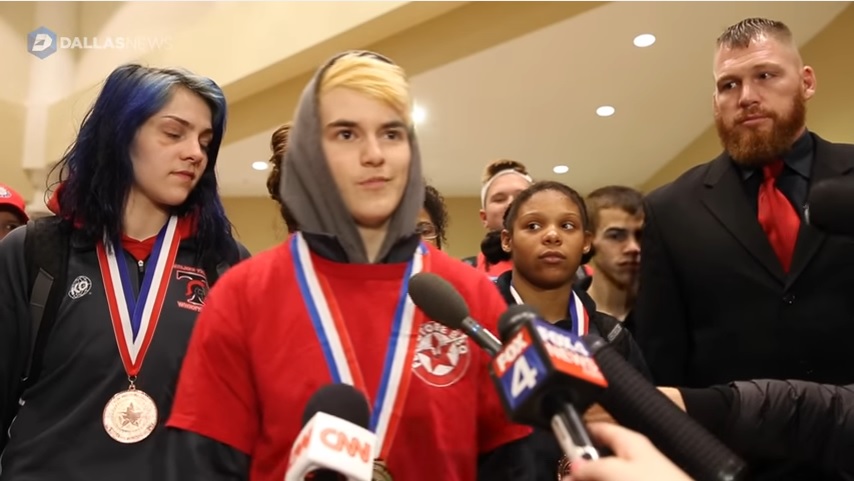 The controversy surrounds Mack Beggs, 17, a high school girl in Texas who is undergoing testosterone treatments because she wants to be one of the boys. She prefers to wrestle as a boy, but the organization governing Texas high school sports required her to wrestle as a girl – her birth gender. Beggs just capped an undefeated 52-0 season by winning the state girls’ championship in her weight class, leading to cries of foul and forfeits by two of her tournament foes.

Prior to the state tournament, one parent sued the Texas University Interscholastic League out of fear a girl would get hurt by Beggs. The League had previously voted 586-32 for its birth gender policy.

WaPo's Katie Mettler focused on the critics of that decision as “‘horrible policy’ that would discriminate against transgender athletes who were unable to afford the complicated maneuvering that goes into legally changing one’s birth certificate through the state.” Mettler also claimed the association’s policy is “backfiring.”

Dallas Morning News columnist Kevin Sherrington demanded that if the state athletics association refuses to change its rule, then a court of law should do so.

Meanwhile, that “horrible policy” resulted in a state championship for Beggs, who would might have lived a life of obscurity if she had gotten her wish for tougher competition against boys.

The Washington Post crowed that Beggs is “the first transgender participant to win a Class 6A girls’ state championship in Texas high school wrestling. ‘I just witnessed my sport change,’ a longtime Texas wrestling coach said.”

Big Media from coast to coast typically reported the event as if a boy had won the girls’ state wrestling title. Running the AP story, The New York Daily News claimed: “Beggs fell to his knees for a moment after the win as a mixture of cheers and boos rained down on him. He then hugged his coach and left the mat. He had a bit of fun with his fellow wrestlers at the medal ceremony when he counted down from three and all six of the top finishers posed by doing a dab on the medal stand.”

Attempting to “re-write” biology text books, The Associated Press reported, “Beggs’ participation comes at a crucial moment, with the public and politicians debating the growing belief that gender is fluid.”

More than six billion earthlings who aren’t confused about the fact they were born male or female would strongly debate the idea that gender is “fluid.” It’s a radical claim by LGBT activists and their lap-dog friends in Big Media. The truth is that people can mutilate themselves, take hormone treatments, wear wigs and say their gender has changed all they want. That doesn’t make it so.

AP also politicized the Texas controversy this way: “Just this week, the Trump administration announced an end to federal protections that allowed transgender students to use facilities based on their gender identity, leaving states and school districts to determine their own policies.”