Cincinnati Bengals’ defensive back Adam “Pacman” Jones is not going to win the NFL’s Bart Starr Award for “outstanding character, integrity and leadership in the home, on the field, and in the community.” He’s not even in the conversation for any awards based on good citizenship. Jones was arrested January 3 at a Cincinnati hotel and charged with harassment with a bodily substance, assault, disorderly conduct and obstructing police. 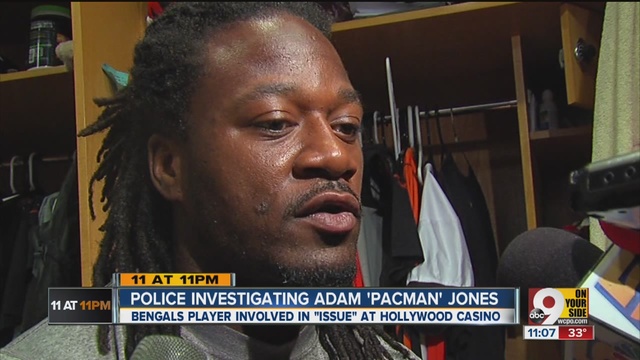 Hotel employees said Jones was pounding on guest room doors and then assaulted a security investigator. When the police arrived, Jones’ got even more violent. Court records state he head-butted and kicked at police officers and resisted arrest before being hauled off to jail.

In the police vehicle, he told Sgt. Jarrod Cotton, “I hope you die tomorrow.” Video shows that Jones repeatedly insulted the officer, calling him a “bitch” and a “n-----”   and telling Cotton to perform a sex act on him. On the video, Jones is heard saying:

Jones also told Cotton he would "spit on your a--, if I could." At the jail, Jones refused to cooperate and was placed in a restraint chair. He spit on a female nurse.

We are extremely disappointed with Adam’s behavior. The behavior in the video is not what we expect from our players. The Club is aware that Adam has put forth his own apology, however, we also offer an apology to the public and to our loyal fans.

To The Cincinnati Enquirer’s credit, the newspaper’s website posted an editorial urging the Bengals to release Jones: “It’s time to send the Pacman packing.”

Jones’ outrageous behavior comes at a time when America’s police officers are under increasing attacks. And it raises red flags on the NFL’s denial of a growing problem with out-of-control lawless players. It’s also less than two months after five NFL players traveled to Washington, D.C., to meet with congressmen about police brutality. Detroit receiver Anquan Boldin and the NFL Players Association (NFLPA) were instrumental in arranging those meetings.

Media and the NFL have overlooked a much more prevalent problem than that raised by the NFLPA. The arrests of Jones and Los Angeles Rams’ running back Tre Mason – for eluding police Jan. 10 – raised to 68 the number of NFL players arrested since the beginning of 2015. The meeting that really needs to take place is a parley of law enforcement leaders with NFL Commissioner Roger Goodell and the players’ union about the excessive lawlessness of pro football players. It’s time for the league to take off its blinders and get serious about its rogue athletes.

It would also be a good time for the media that celebrated Colin Kaepernick's anti-cop anthem antics (and police pig socks) to take a hard look at what its selling.