September 11, 2001 is the single worst day in U.S. history -- other than the Japanese attack on Pearl Harbor perhaps. That day saw 2996 innocent Americans killed on U.S. soil by a foreign enemy. Serious people know and respect this. But many in corporate media aren't serious people. They cheapen it with ridiculous comparisons meant to smear people and political movements they don’t like, i.e. President Donald Trump. Media have embraced the dismal trend of selling every new threat to their dominance as worse than the worst day in our history. 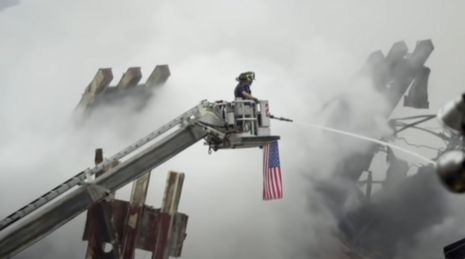 That should get Americans concerned.

Despite the fact that radical Islamist Al Qaeda terrorists flew passenger jets into the Twin Towers of the World Trade Center, the Pentagon and -- thanks to heroic patriots onboard Flight 93 -- a field in Pennsylvania, killing nearly 3000 Americans in one day; media has cheapened the tragedy in its coverage of events since.

In order to get Americans to do the ruling class’ bidding on climate change, gun control, white supremacists and of course the bogeyman, Donald Trump himself, commentators for far left rags and for idiotic cable news talk shows have claimed that each one has presented as bad or worse a threat than 9/11.

Can you believe that? Climate change, white supremacist terrorists, and a duly elected American president are worse than that terrible day the towers fell and we lost 3000 Americans? Well if you love CNN, MSNBC or Huffington Post, maybe you do believe it.

Trump & Republicans Are As Big A Threat To U.S. As Bin Laden & Al Qaeda

Unsurprisingly President Donald Trump has received much of this overblown “worse than 9/11” hysteria. The former president, his party, his followers and everything they promote or even touch have been put through the, “Is this like 9/11?” media filter for the last five years.

A year after President Donald Trump was elected, Former MSNBC host Keith Olbermann went on The View to discuss how “Trump and his family have done more damage to America than bin Laden and ISIS combined.” That absurd line was tweeted out by the crazy Olbermann prior to the interview, but he was invited on to defend it. View co-host Sunny Hostin seemed inclined to agree with his point and, even worse, the show’s audience applauded it. Thankfully co-host Megan McCain called it a ridiculous statement.

Though that’s just one of many instances. In 2021, MSNBC host Joy Reid didn't disagree with contributor Kurt Bardella, who claimed on an episode of The ReidOut that “Al Qaeda, Osama bin Laden, the Taliban, the people who wanted to do harm to our nation and to our way of life and democracy, they got nothing on what this Republican Party is doing.”

MSNBC seems to be the breeding ground for crazies who claim that Trump and the GOP is as evil as Bin Laden. In August 2021, NBC contributor Dean Obedelliah went on MSNBC’s The Sunday Show with Jonathan Capehart and made two batsh*t insane statements. First he claimed that “Fox News is "the Al Jazeera of America after 9/11,” and then called President Trump "the Osama bin Laden of January 6th."

Speaking of January 6, 2021, there were several instances of mainstream media turning an unorganized angry mob of Trump supporters that rioted at the U.S. Capitol during the certification of the 2020 election into an event worse than the planned, and focused killing of 3000 Americans by Islamic radicals on 9/11. Sure, only one person, (a Trump supporter) died at the scene at the Capitol, not to mention that the FBI found scant evidence that the riot was organized by antigovernment groups, but according some, the 6th deserves to go down in history on par with 9/11.

Of course Joy Reid is on this list again. During another episode of The ReidOut in July 2021, the host and faux Republican Matthew Dowd discussed how January 6 was an event worse than arguably the worst terror event in history. Dowd told Reid how he believed that “January 6th was worse than 9/11 because it's continued to rip our country apart and give permission for people to pursue autocratic means.” He also added that he thought it marks the most dire time in our country since the literal Civil War. And of course, the loony Reid agreed, responding, “I do too. I do too. And it — it frightens me.”

The host also mentioned the riot reminded her of events in “Mussolini’s Italy” during World War Two. What a pair of jerks.

Anti-Trump conservative columnist George Will told ABC’s This Week viewers in June 2021 that they need to see the event on January 6 in the same way they saw the events of September 11. “I'd like to see Jan. 6 burned into the American mind as firmly as 9/11,'' Will said on air, while petitioning for Congress to institute a 9/11-style commission into the events that happened outside the Capitol building that day.

Another example of turning January 6 into the worst terror event in American history came from Huffington Post writer S.V. Date, who in May 2021 tweeted that the riot was “1000 percent worse” than 9/11. Initially Date explained via tweet that “The 9/11 terrorists and Osama bin Laden never threatened the heart of the American experiment. The 1/6 terrorists and Donald Trump absolutely did exactly that. Trump continues that effort today.” When someone called the journo out for the overblown sentiment, Date doubled down calling January 6 “1000 percent worse.”

Trump Not Conceding 2020 Election Poses Threat Not Unlike 9/11

Several times in 2020, the media also suggested that Donald Trump not accepting the results of the 2020 presidential election or not conceding to Joe Biden after the “results” of the 2020 election were announced constituted a threat to “our democracy” as great as Al Qaeda terrorists killing people on airplanes to get control of aircraft to crash into our country’s most important buildings and kill multiple thousands of people.

In November 2020, CNN, CBS and NBC warned that this was the case. They surmised that, because Trump was not conceding the election at that point, it was causing a delay for Biden appointing the proper security team to his cabinet thereby shortening future confirmation hearings for these people and not letting them get settled into their security roles quick enough to focus on 9/11-style threats … or something.

CNN Newsroom anchor Jim Sciutto said, “Because there are sitting members of Congress who were around in their positions at the time of 9/11, and the 9/11 Commission Report specifically cited the shortened transition after the 2000 election for having an impact on national security.” Because apparently Bush and Gore disputing the 2000 election left holes in our protection.

NBC’s Savannah Guthrie made this same point on November 11, 2021, claiming “the 9/11 Commission actually said when Democrats slowed the transition to George W. Bush’s administration back in 2000 that that had an effect on what happened in their preparedness for 9/11.” She then accused Republicans and Trump of flirting with this danger by not conceding. “Are Republicans worried about the national security implications of delaying all of this?” she asked.

CBS This Morning co-host Tony Dokoupil made the same warning about Trump’s actions, telling viewers, “The 2000 election had a delayed transition to December 13th and the 9/11 Commission actually identified that delayed and shortened transition as contributing to the lack of preparedness on 9/11, worst terror attack in U.S. history. So this really matters.” Yeah, Trump not accepting the results really put us in danger of another 9/11. He should have just done what Democrats wanted.

And of course there has been an assortment of newsworthy issues less directly related to Trump that the news has spun up as being as bad or worse than 9/11 in order to get viewers and voters to support leftist solutions to said issues. For instance, when isn’t Climate Change a terrifying issue for the left? In an op-ed from The Hill in August, author Deborah Brosnan argued that climate change is so serious that it needs to be responded to the same way that NATO responded to 9/11.

Brosnan wrote, “After September 11 — when Article 5 was invoked for the first time — NATO nations united in their response. They acted collectively, shared intelligence, completed missions together and agreed to specific protection measures.” She added, “basically, what many of these significant acts of terrorism or war do, climate change does as well.” Oh, so we need a full multinational military mobilization to beat climate change just like we needed for Al Qaeda post-9/11? Give us a break.

In another hare-brained take administered via CNN programming, CNN Legal & National Security Analyst, Asha Rangappa went and claimed that 3D printed guns could result in the next 9/11. During Cuomo PrimeTime, Rangappa claimed, “when you get on an airplane, you now have to worry about someone who may be sneaking in a plastic gun, and this is really just asking for potentially another 9/11.”

Chris Matthews got even weirder with the cheap 9/11 comparisons back in 2017 as the news media were still reeling over Trump beating Hillary Clinton. In his opinion, part of the blame for Hillary’s downfall belonged to the “Russian” trolls on Twitter who allegedly made millions of fake posts about the 2016 presidential candidate and got people to vote against her.  Matthews claimed these trolls were so bad, they manipulated Facebook the same way Al Qaeda manipulated American’s private flight school programs.

Matthews began by saying, “You know, when they came here to bomb us — hit the World Trade Center back in 2001, do you notice how they came here for flying lessons? And Americans gave them flying lessons down in Florida.” He then added that in that same way, these Russian trolls “just casually take Twitter … They exploit Facebook. They pay a few bucks and these numb nuts that give them this authority — they treat these platforms like they are open to anybody.” So you post some anti-Hillary memes on Facebook and suddenly you’re Bin Laden?

And last but not least was the cheap rhetorical spin Meet The Press host Chuck Todd put on then-President Trump’s Coronavirus response during the height of the pandemic to make him look bad. In September, the NBC host stated on air, “Our nation has not seen a week where the coronavirus death toll was fewer than 3,000, i.e. 9/11, since the end of March. To put it glumly, we are losing more Americans every few days to this virus than we lost in 9/11 entirely.”

Todd then concluded that Trump can’t see the multiple 9/11s happening on his watch, adding, “it just isn't that the president is not appropriately acknowledging the gravity of the growing death toll and the virus. He's also still downplaying the severity of the virus.” Yeah, thank you, Mr. Todd. People dying from a natural disaster is not the same as the willful murders of thousands of Americans by extremists.

And even if COVID did kill more people than 9/11, the fact that people are using one of the worst tragedies in American history for anti-Trump rhetoric and to promote lefty policy is the most cynical, cowardly and mendacious action one could imagine. It's the kind of action that spits on the graves of the brave Americans who died that fateful day twenty years ago. But that’s just the kind of action our media loves, isn’t it?