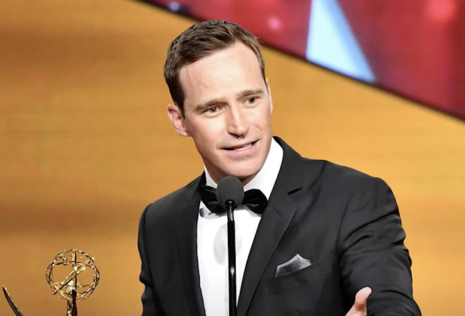 Well they finally found someone to replace Alex Trebek as the permanent host of Jeo – annnnd he’s gone. Well, Mike Richards was the new permanent host of longtime broadcast TV game show Jeopardy, but as with most showbiz career implosions in the modern era, his old jokes did him in.

And to think, Jeopardy! hired him only nine days ago.

According to People.com, after months of searching for a replacement for the late great Alex Trebek, the show’s staff decided on former Jeopardy! Executive Producer Mike Richards.

Though that seemed to be a problematic decision, as Richards was recently found out to have made problematic comments about women on a podcast around seven to eight years ago. Oh no, sound the alarm! Due to heavy backlash and countless headlines critical of his misogynistic behavior from almost a decade ago, Richards announced that he was stepping down from the position.

Richards’ incriminating comments came from a podcast that the former Jeopardy! and Price is Right executive producer hosted in 2013 and 2014 called “The Randumb Show.” Pop culture outlet The Ringer, reported on his past comments which many are considering to be highly offensive to women.

In one instance during the show, Richards claimed that one piece bathing suits make women look “really frumpy and overweight.” He also referred to one of his guest’s work as a tech convention model as a “booth ho” or a “booth slut.” Also, around the time when a bunch of celebrities had nude photos leaked online, he also asked female guests whether they had ever taken nude photos of themselves. He referred to them as “booby pictures.” Richards also made derogatory comments about other “marginalized” groups.

The Ringer featured snippets of the audio, and the context of many of these comments seemed to be humorous. Of course, we in no way would ever defend misogynistic behavior, but Richards’ comments sounded more like playful teasing rather than aggressive abuse. That’s what he recently claimed he saw them as at the time. “The podcast was intended to be a series of irreverent conversations between longtime friends who had a history of joking around,” he said, though he admitted that they were “not acceptable.”

So of course Richards apologized, saying, “Looking back now, there is no excuse, of course, for the comments I made on this podcast and I am deeply sorry.”

Still the apology didn’t end up being enough. Richards felt that he generated so much controversy that he had to step away from his shiny new gig. On August 20, People.com reported he “sent a memo to staffers announcing the news of his departure.”

Richards said, “Over the last several days it has become clear that moving forward as host would be too much of a distraction for our fans and not the right move for the show.” Thus he claimed, “I will be stepping down as host effective immediately.” Yeah. That’s right. If you’ve made an off-color joke within the last 10 years, don’t even try to get a job in media, guys.