Olympic gymnastics champion Simone Biles may be a legend on the mat, but when it comes to her views on unborn children’s right to life she completely botches the landing. 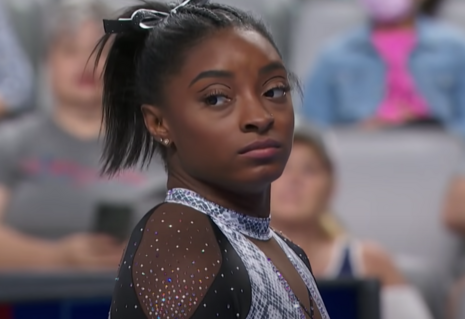 In a recent social media post, Biles revealed she’s your typical pro-choice Democrat who thinks that abortion is a great option, at least a better option than either foster care or adoption. Yup, the 4-time gold medal winner thinks killing kids is better than risking them having a less than cushy life.

Sure, athletes can get away with not being the most sophisticated people on the planet, but come on, Simone. This take is DUMB.

As a way of engaging her 6.9 million Instagram followers, Biles began a poll of “unpopular opinions” on her page. She asked her fans to give her controversial subjects or statements and she would weigh in on them in subsequent posts. Several of the unpopular opinions her fans produced were trite things like “Ketchup is nasty” and “I hate pickles” and the world was given the privilege of seeing Biles go to bat for foods that go well with a hamburger. Sweet.

Though, as it always happens, someone actually put a controversial statement in Biles’ inbox. Well, it was controversial for Simone, at least. Someone wrote, “Abortion is wrong,” and the Olympian had quite a few things to say about that.

Biles wrote back, “I already know this is going to start the biggest argument [and I] may even lose followers BUT,” she began. Oh, no, here we go. “I’m very much pro-choice. [Y]our body[,] your choice,” she said. Sadly, rarely are our sports heroes our intellectual or moral heroes. 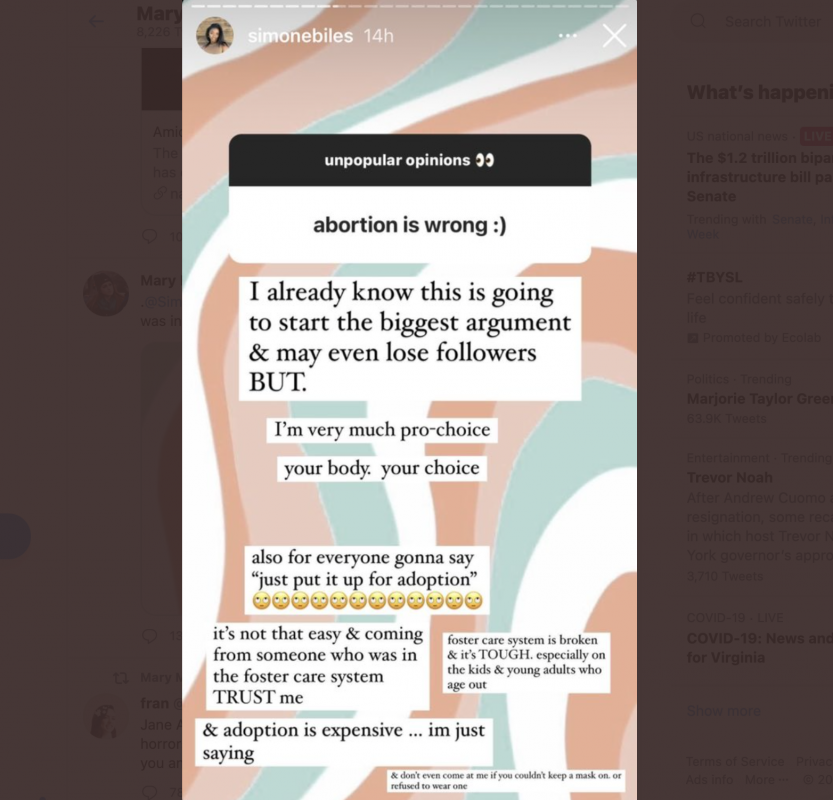 Also, this is highly ironic considering in an earlier response Biles agreed with the statement that the COVID-19 vaccine not being FDA approved is “not a good enough excuse” for people not to take it. Plus, she later warned people who "couldn't keep a mask on" or who "refused to wear one" not to "come at" her. What about “my body, my choice?” Anyways.

Of course, the obvious thing Biles seems wont to consider is that abortion isn’t just about the mother and her choices involving her life, it’s also about the life of another person altogether. So, she isn’t considering the unborn baby’s right to life. At least, in that very specific instance of abortion. But, then, she turned around and spoke for the unborn life, saying that abortion is good because it’s at least better than foster care or adoption.

“[A]lso for everyone gonna say ‘just put it up for adoption’ ... it’s not that easy [and] coming from someone in the foster care system TRUST me.” Oh, isn’t that typical. Biles knows what’s good for millions of unborn babies, and killing them is better than putting them into foster care, apparently, or the expense of adoption.

She continued, “[F]oster care system is broken [and] it’s TOUGH. [E]specially on the kids and young adults that age out.” So, life is tough, huh? So, let’s remove it from people who don’t have a say? Would Simone agree that we wipe out the poor and destitute on the streets so as to relieve their suffering? And she was in foster care - would she rather have been aborted than win her 4 gold medals? It would have saved her the pain of foster care.

Biles apparently didn’t like the pushback she received, because she deleted the post shortly thereafter. She should just stick to flipping.