Proud anti-religious homosexual Lil Nas X continued his war against the Catholic Church and traditional marriage at the 2021 BET Awards. 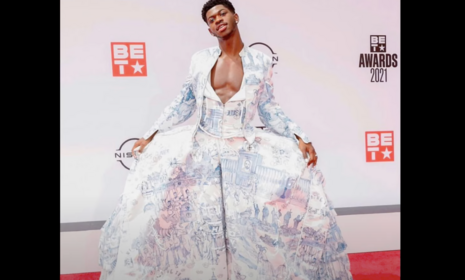 Appearing on the red carpet for the annual BET Awards, Nas X, whose real name is Montero Lamar Hill, turned heads with his ball gown. Though the homosexual man wearing a dress with a plunging neckline wasn’t the controversy of the moment, believe it or not. It was that the blue and white pattern on his dress featured a message attacking the Catholic Church by equating it with Nazi-ism.

Hollywood site PopSugar teased the message on Nas X’s dress, reporting that the “blue-and-white gown — created by Andrea Grossi, a young graduate from Polimoda Fashion Institute in Florence — has a print that you’ve got to zoom in on to get the message.” Oh how interesting. Let’s get a closer look.

According to Grossi’s website and fashion design page, the dress is part of a project called “DeusLand,” which is a play on the Latin word for God (Deus) and Deutschland, though we are talking Deutschland when it was run by the Nazis. The ultimate point being made by the artist, – and Lil Nas X on the BET Awards red carpet –  is that the Catholic Church and the Nazis are bad on the same level.

In a description of the project on his website, Grossi wrote, “The project ‘Welcome to DeusLand’ is a collection that talks about a future society and the future of human being. In which direction is mankind going? What are your next goals?”

Interesting. Though apparently for Grossi, the future direction of humanity cannot be entrusted to the Church. “Through an artwork I notice and describe the ‘Occident’s Chaos’ with parallelism between Nazism and church, ideologies that have led the populations for a long time in wrong ways," he claimed. Oh Ok. So universal message of Jesus Christ is comparable with the aggressive power-seeking of genocidal Nazi Germany. Right.

Though that sounds like a privileged assessment from someone studying at an Italian art school. You’d think Grossi would be more grateful to stand on the shoulders of western art achievement made possible by the influence of the Catholic Church.

But enough about atheistic art snobs. Of course, Lil Nas X wore this dress at the BET awards because it’s another dig at his enemy and oppressor, the Catholic Church. The musician’s statement was more subtle follow up to the Satanic splash he made this past spring with his music video for “Montero (Call Me By Your Name.)” That video featured X embracing his homosexuality despite the un-approving stance of the Catholic Church towards gay sex, and in order to spite the Church, featured him having simulated sex with Satan in hell.

The video ended in true satanic fashion, with X killing the devil, post-copulation, and crowning himself as the king of hell. The jokes on Nas, however, as that’s the same sort of satanic pride that cast the prince of lies into hell, and Adam and Eve out of the Garden.

In addition to that disgusting piece of media, X soon followed that up with an attempt at marketing black and red 666-themed “Satan Shoes.” Though the venture was short lived as Nas was using Nike shoes unauthorized by the actual shoe company. Nike threatened a lawsuit and the artist agreed to a recall of the product.

In addition to wearing the dress, Lil Nas X staged a gay make out session with his male dancer onstage at the BET awards at the conclusion of his live performance. It was over the top and intended to provoke. We must pray for him.