So a "pro-choice" Christian pastor who's also the radical leftist U.S. Senator from Georgia said something heretical about the Son of God on Easter Sunday of all days, and to be honest we aren’t the least bit surprised. 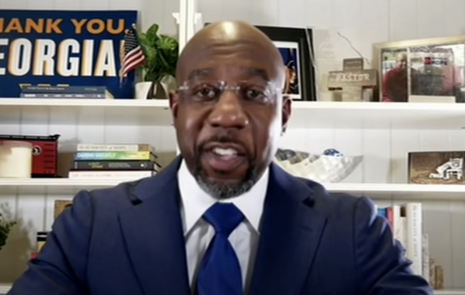 On Easter Sunday the radical preacher and newly-elected U.S. Senator Raphael Warnock (D-GA) composed an Easter message that actually denigrated the significance of the death and Resurrection of Jesus Christ. Warnock’s disturbing and blasphemous tweet insisted that the most important event in the history of creation is cool and all, but it doesn't compare to how every man can save themselves every day through good works. Huh?

Warnock tweeted, “The meaning of Easter is more transcendent than the Resurrection of Jesus Christ. Whether you are Christian or not, through a commitment to helping others we are able to save ourselves.”

Wow. Warnock needs to replace the “Reverend” on all his cheap business cards to “False Prophet” because this is a shocking heresy and an extreme insult to Christians everywhere. Man is only redeemed by Christ, and the only reason man’s good works help him is because they’re proof of an earnest cooperation with God’s gift of grace that was given to us through the Passion of His Son.

Remember, we have eternal life and freedom from sin because of the Death and Resurrection of Jesus Christ. To say that radical progressive politics or community organizing – of the kind that Warnock and Obama enjoy – gives us something greater than that is so arrogant and wrong.

It’s clear that Warnock believes earthly prosperity is ultimately more meritorious than Christ’s opening the gates of eternal life to us and reconstituting our relationship with God the Father. Warnock’s “faith” seems to have earthly priorities like social justice. It's all about making this world a better place because that’s all there is.

We’ll try not to assume too much of course, but what else could Warnock mean by this tweet? Is Christ’s death not transcendent enough because it didn’t lift everyone on earth from poverty or eradicate all forms of systemic oppression? 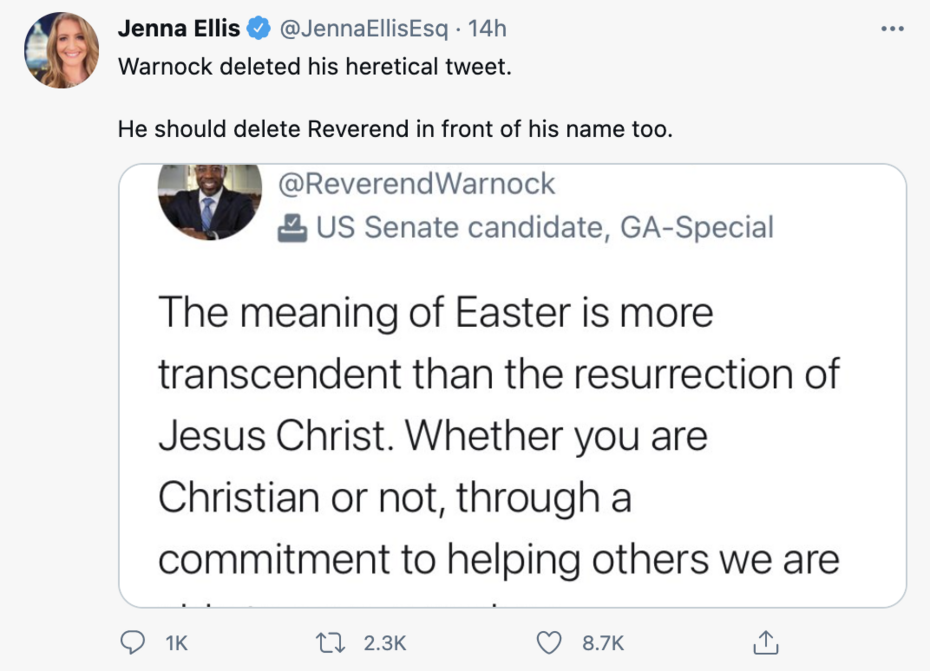 Either it was an extremely poorly worded and ignorant statement or calculated to subvert the message of Easter Sunday. Still, the argument that humanism and antiracist BS eclipse Jesus’ sacrifice is subversive and disturbing all the same.

Again, what else could you expect from someone who once called himself a “pro-choice pastor?” So this man is proud to preach the Gospel and also stand by society’s ability to kill millions of innocent children. Warnock is leading dumb Christians to hell and that’s just what it is.

Though Warnock deleted the tweet a short while later. Thankfully Trump's former Senior Legal Adviser Jenna Ellis saved a photo of Warnock's post and tweeted it out with the caption, “Warnock deleted his heretical tweet. He should delete Reverend in front of his name too.” Yes he should, for the sake of his soul and the souls of the ignorant who would listen to him.