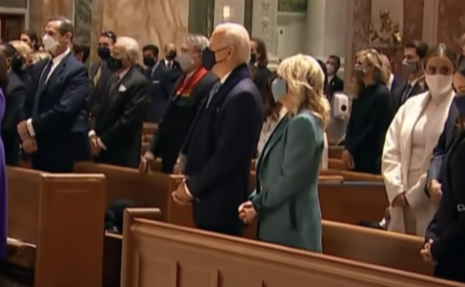 Leftists need American Christians to know that Jesus Christ was actually a far left radical who would be wearing pink pussy hats, and demanding that we “eat the rich” and date sex workers if He were walking around on earth nowadays. All the right wing Christians are missing that and that’s why America sucks right now. That’s what left wing loony Nicholas Kristof argued in his latest New York Times op-ed.

In a piece titled, “Progressive Christians Arise! Hallelujah!”, Kristof asserted that Joe Biden-style Christians are now becoming more prevalent in the public square and that means some damn normalcy and actual Christianity for once. In addition, Kristof’s perfectly convenient worldview consisted of Conservative Christians being insensitive scum, which he illustrated with instances of a fringe lunatics invoking the name of Christ.

This was his way of saying that the Christians who believe that marriage is between a man and woman or that abortion is a grave evil, are that same type of crazy.

Typical. Check this BS out.

On March 20, Kristof wrote, “Enter Joe Biden, one of the most religious presidents of the last century, along with Jimmy Carter and George W. Bush. Biden attends Mass regularly and inhabits faith as Donald Trump merely brandished it.” Kristof even invoked the examples of good “catholic” Alexandria Ocasio-Cortez, and church-attending Baptist Kamala Harris to bolster his claim that FINALLY, actual religious people are in charge. Too bad all three of those examples go against Christ’s teachings in obvious ways.

Even if Kristof hates the Church, he cannot pretend that Joe, or O-crazy-o, or Kamala are doing it right. If anything the author just needs to admit he wants a new progressive religion with a superficial Christian veneer that just happens to espouse everything New York Times types think is righteous. It’s so much easier than the real thing.

OK? So we have two examples of bad Christians here. A Biden/Harris Christian and a Christian that promotes violence. What Kristof's point? Of course, it’s to smear the Trump voting conservative Christian as that crazy, violence-prone zealot. Kristof cited a progressive nut job who calls himself a pastor, Rev. William Barber, who said, “Some folks hijacked Christianity and decided that they were going to put up a lot of money to promote the idea that to be a person of faith was to be anti-choice, anti-gay, pro-gun, pro-tax cut.”

Excuse us? Being pro-choice, pro-gay, and anti-self-defense is what Christianity should be? Again, Kristof can hate the Bible, but how can he hate what he clearly never read?

Still he offered up one bit of Scripture to bolster his point that heretical Jesus is best Jesus: “The progressive wing of Christianity is not, of course, new. It began with Jesus,” he wrote, adding, ‘Woe to you that are rich,’ Jesus says (Luke 6:24). He advises a rich ruler to ‘sell everything you have and give to the poor.’”

Hmmm, how does that play with our corporate billionaire overlords who censor people to push a leftwing narrative? What do the Hollywood types say to that suggestion?

But yes, enough beating around the bush. Our author just thinks that having a bunch of heretical Christians in office is swell. It means we don’t have to get caught up in rules anymore. It means you can have Jesus, and the way of life you want, sinful or not.