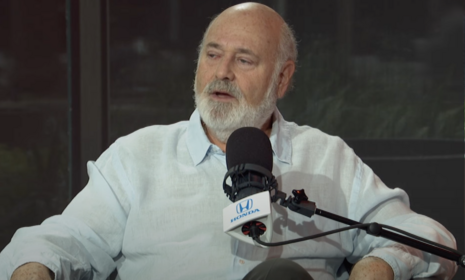 Longtime Trump Derangement Syndrome-suffering actors, including Rob Reiner and George Takei, blamed the former president for the very recent and very tragic murder of eight people at three separate Atlanta, Georgia, spas that happened on March 16. According to investigators, six of eight people killed were of Asian descent and despite the fact that the lead suspect in the case denied a racial motive in the killing, blaming instead it on his “sexual addiction,” celebs like Reiner are doing what they do best and blaming the killings on the rhetoric of our former “Racist-in chief.”

The day of the shooting, Reiner jumped to contextualize it in a light that was most politically expedient for him, i.e. putting it on his sworn enemy Donald Trump. The Princess Bride director tweeted, “I’m sorry, but the deaths of over half a million Americans, the deadly  seditious insurrection, the murders of Asian-Americans all lay at the feet of Donald J. Trump.” Oh, yeah, it’s an ever growing list.

Of course, we assume that Reiner’s demented logic here is that Trump constantly reminding Americans that the virus came from China – as it did come from the neglectful Chinese government who failed to secure their research lab and also failed to disclose knowledge of the outbreak until weeks after – translated into people here blindly whooping up on Asians in general. Well, that’s stupid.

And, again, the alleged Atlanta spa shooter “gave no indicators that this was racially motivated,” said Cherokee County Sheriff Frank Reynolds. The clearly deranged murder suspect, 21-year-old Robert Aaron, claimed his intention was to eliminate his sexual temptation. Apparently, massage parlors were an occasion of sin for the young man.

But, no matter. If all the crimes of the world are branded onto Trump and then he’s forced to walk the plank or jettisoned out of the airlock, then there should be peace on earth. Isn’t it so nice that in order to achieve that result, Reiner’s confusing the story on a very serious and deadly criminal case? What a guy!

Japanese American actor George Takei abandoned discretion as well in his desire to further hate on Trump. First he established that the shooting was unequivocally a racist killing, even if it wasn’t. The Star Trek star tweeted, “Whether the killer went in with intent to kill Asian women or he just happened to go to three different Asian establishments, miles apart, with intent to kill those inside doesn’t change the racial nature of these murders.” Yeah, it was racist whether the killer knew it or not.

Wouldn’t it be a disaster if Takei was a law enforcement officer who was just spouting off motives for a crime like this? On top of insisting on the racist nature of the crime, a subsequent tweet featured Takei blaming the crime on Trump. Sharing a blog about how anti-Trump clown, Rep. Ted Lieu (D-CA) called Trump out for igniting racist rhetoric that led to murder, Takei tweeted, “The legacy of Donald's hate.”

Ok, well, considering that Reiner and Takei are trying to muddy the waters surrounding what happened in Georgia for their own political gain, they seem to be the ones standing in the way of proper justice for the people who died.