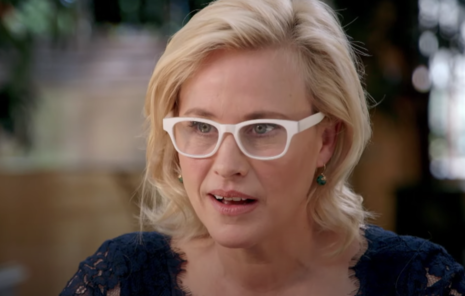 Some real steps to securing order in the wake of the violent Black Lives Matter riots have commenced in Portland, Oregon, with Federal agents rounding up agitators. On cue, the left immediately screamed that this is evidence that Trump is Hitler.

Though millions and millions of dollars in property damage has been committed, though angry mobs have threatened normal folks in their homes, though Antifa and Marxist terrorists have been coordinating mob violence via the George Floyd protests as a way to intimidate Americans into getting onboard with crazy leftist policy (“defunding the police,”) Hollywood and the media are calling federal efforts to stop the ugliness, “fascism” on the level of Nazi Germany

Hollywood’s dumbest sister duo, Patricia and Rosanna Arquette, spent all last evening and this morning tweeting about how a video of federal agents rounding up what appears to be an Antifa member and putting them in an unmarked vehicle in Portland Oregon, is proof that Trump is actually employing “Secret Police.”

Patricia Arquette, one of Hollywood’’s biggest whackos, became positively unglued at the thought that someone was putting a stop to the violence in Portland. Her first hysterical tweet claimed, “Call them Trumps Stasi, His Secret Police ,His Gestapo or KGB Call them What you will but they have Just Begun  here in America attacking American Dissenters- #NotOnOurWatch.”

Sure, if these were “peaceful protesters” as Hollywood and the media need you to believe, perhaps this would be disturbing.

But again, though Portland has been marked by Antifa street violence since Trump got elected, and even though they’ve attempted to build their own “Autonomous Zone” during the BLM riots, on top of committing numerous acts of violence against police and bystanders, Patricia didn’t pull her punches with the authoritarians desiring an end to the chaos. She tweeted a photo of Trump with Swastika on it and tweeted, “As Trump coordinates His Secret Police to kidnap American dissenters. We must admit we are here-.”

Sure. Though Trump hasn’t used any force for two months after violence erupted – to the chagrin of many of his supporters – he’s the Fuhrer for finally dealing with people his DOJ considers “Domestic terrorists,” after innocent Americans have lost their lives.

She spouted off again, tweeting, “Trump is turning America into a true shithole country. Where Americans are being hunted by secret police who are tossing US citizens into rented vans and refusing to identify themselves.” Go look at NYC and what’s left of Seattle’s CHOP, Patty. You’ve aided and abetted those shitholes yourself, by defending these clowns.

Her sister Rosanna Arquette took time out from spreading anti-Semitic conspiracy theories to tweet, “The top story in the country right now should be un identified men with Military killing machine GUNS are arresting and kidnapping peaceful protestors in Portland.”

Oh, “peaceful,” huh? $23 million in property damage has been inflicted on the city in recent months. According to reports, Portland Police have been overwhelmed, and federal property has been targeted by vandals. According to Fox News, a federal officer was also allegedly struck in the head with a hammer by one the “peaceful” protesters while defending a federal courthouse in the city.

Still the actress insisted, “we don’t know where they are taking them. This is Terrorism ,GESTAPO tactics and incredibly illegal.” Yeah, securing the community is now something characteristic of “secret police.” These celebs are protecting violence in Portland.