It’s been about six months since Kathy Griffin’s last epic plea for attention. It must be time for her publicists (how’s that for a thankless job?) to their earn their retainer again. Everyone’s heard ad nauseam how she was blacklisted after her severed Trump head stunt. The world is hip to her story about Trump loosing government agents on her. And there may even be those who believe, all evidence to the contrary, that she’s funny and likable enough to have survived her attempted career suicide-by-OrangeMan. 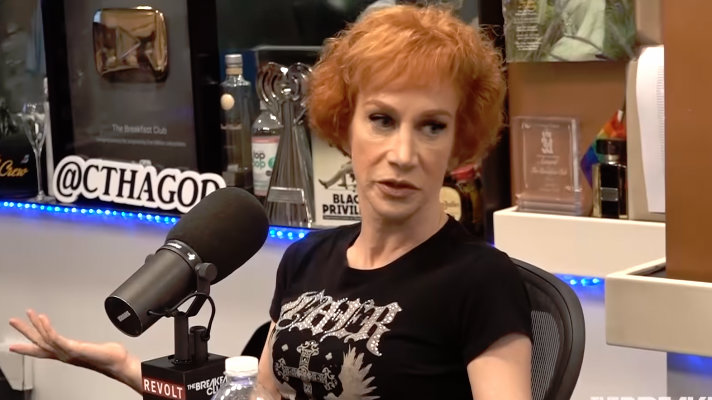 “I feel I feel a lot of this is because I’m a 58-year-old woman. I’m a successful stand-up comedian, which flies in the face of everything Trump and his folks believe.” Sure thing, Kathy. What would a tyrant be without his hatred for older career women? “My impression is they’re just offended by the audacity that I want to continue to work and be successful and I’m a self-made woman.”

These days, “audacity” is self-deception with a PR agency.

Griffin has every intention of making the comeback she keeps threatening. In the meantime, she’s whining to Variety yet again about being the victim. The “funny,” “raw,” and “furious” “voice of Trump’s resistance” (Variety’s words) lost everything, but she’s a fighter. She produced her own tour in 2019, and has recently debuted her own film at the 2019 SXSW Film Festival.

Not that any of it is going to help with her Trump-inspired insanity. Variety asked Griffin whether people still think she did something wrong, and her answer indicated that she still doesn’t get it.

“A lot of people thought that I broke the law. And once the investigation started, I can see how they would reach that incorrect conclusion,” Griffin responded. Of course, most people weren’t concerned with the legality of the incident, but that it was just gross. She even brought in big tech as the oppressor, adding, “We’re now in this information era where Mark Zuckerberg wants to control your news feed, and I’ve had to roll with it just like everybody else has. To this day, all the Trumpies will flood my timeline.”

Newsflash: It was macabre, tasteless and weird, and sometimes that’s all you need for something to go viral. But Griffin knows that -- why else take the photo in the first place?

Variety then asked whether she feels “blacklisted” at the moment, and of course the comedian replied, “Yeah. I think I’m living it right now.” She admitted that she’s caused a lot of what people “consider” to be trouble and that much of the “stigma” she has endured runs the gamut from “ageism to ‘Am I your cup of tea?’” Finally, a bit of self-awareness! Lots of people don’t take their tea rabidly uncouth and insanely progressive.

And like many insane progressive these days, Ms. Griffin fully admits that she’s looking to monetize her lunacy. She concluded by saying, “I wish I could go the [Colin] Kaepernick route, where this ends in me getting a $100 billion Nike contract. So I’m sure that’s coming. Maybe with Crocs.”