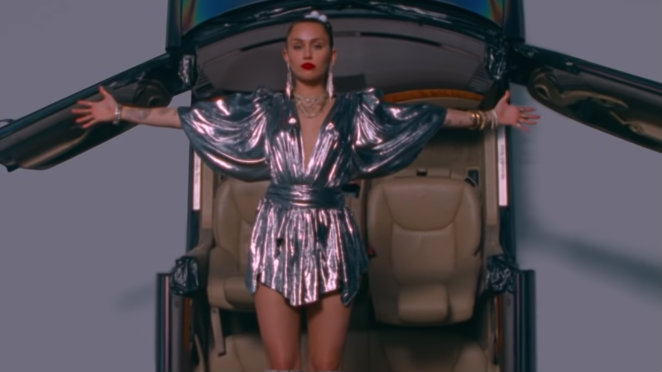 It’s old news that Miley Cyrus is both borderline insane and an avowed leftist who uses her devil-may-care schtick to get young people to think promiscuous sex, drugs, and liberal hobby horse issues are cool. The pop music star has just released a new music video for her song “Nothing Breaks Like A Heart,” and well, it’s quintessential Miley.

DJ Mark Ronson, famous for his collaboration on the Bruno Mars hit “Uptown Funk,” joined Cyrus to write and produce the song, which was released on Friday. The accompanying music video focuses on the themes that pop culture views as burdensome for internet-obsessed young people nowadays. You know, all the common ones, school shootings, hedonistic priests, and finding time to be a part of every #resistance protest that pops up on the South Side on Friday evenings.

The video opens with a car chase, as Miley careens down the highway ahead of law enforcement in cop cars and helicopters. These days it seems like you can’t watch a video screen without seeing angry protestors everywhere, so of course the video shows them immediately, holding up signs with messages like “The end is near” and “Miley for President.” The whole image is trying to convey, like coverage of the March for Our Lives kids, that Miley is fed up and trying to freewheel her away out the heartbreak of an insane world.

But this is Hollywood’s view of why the world is insane, so the video skewers the second amendment, police brutality, and the Catholic Church. Elementary school kids are shown playing with bullets and firing weapons at targets with children’s silhouettes on them. Miley’s ride crashes through the walls of a local seedy strip joint, where Catholic priest are depicted indulging their carnal desires. She speeds by a line of football players kneeling by the side of the road, and she also crashes through a department store, where the carnage of Black Friday is in full swing.

This is intended to seem like all too much for one party-going Hollywood socialite to handle, as the music video ends with Miley’s car barreling out of control, and flipping into a devastating wreck. And if that doesn’t portray her enough as a torture victim of mainstream politics, the idiots behind the video turn her into some Christ-like figure at the end. Miley’s car is shown from the top down with the front doors open while she is displayed hovering over it with arms outstretched.

Ah good. Top it off with a little blasphemy. It’s one thing to ask for divine help if you think the world is running amok, but it’s a whole other level of insanity when you portray yourself suffering Christ’s passion because progressive politics aren’t taking root as well as you’d like. It really adds new depth to the phrase “liberal snowflake.”