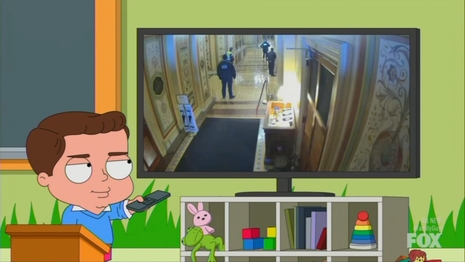 In the minds of leftists, what happened at the Capitol on January 6, 2021 erases all Democratic failures and Democratic-fueled BLM and Antifa terrorism. Therefore, Democrats obsess over it.

In Sunday's episode, "The Candidate," Stewie (Seth MacFarlane) runs for preschool snack captain. His class arch-nemesis, Doug (Chris Parnell), is his opponent. During a debate, Doug says Stewie was with Hawley at the Capitol that day and accuses both of "fleeing the riot they helped stoke":

Dougie: And may I call your attention to my opponent's actions during the attack on The Capitol? Here is Stewie waving to supporters safely behind barricades. And here he is with Josh Hawley, fleeing the riot they helped stoke. (Laughing)

Teacher: Wow, what a little bitch.

During the preschool campaign, Doug also accuses Stewie of having been "a mistake," an unplanned pregnancy. Stewie freaks out over the possibility that his conception was unplanned and worries it will hurt his reputation with his classmates. Such a concern must be indicative of the pro-abortion bubble the show's writers live-in.

On the tape, it's revealed that Lois (Alex Borstein) raped Peter (Seth MacFarlane) while she was ovulating because she wanted to be a mom again. Stewie is relieved.

"Technically I'm only half an accident," he says.

The episode is more disturbing than usual even for a show like Family Guy.

In the end, Stewie walks into the house and tells Brian (Seth MacFarlane) he won snack captain:

Brian: You actually won? Wow, congrats, Stewie. I thought you being a mistake ruined your chances. How'd you pull it off?

Stewie: It turns out 70% of the kids' parents aren't married and 30% are mistakes. Nobody gets married anymore. One kid doesn't even have parents. He just kind of appeared. Sleeps in one of the cubbies. I mean, that's the story I would have told this week, but whatever. Oh, and Doug died in a commuter plane crash this morning.

"The Candidate" was such a perverted episode that, overall, it failed to be funny.

One of the few amusing moments came in a scene mocking trans absurdities. After Quahog's cowboy mayor rides off on his horse yelling "He-yaw" a townsperson shakes his head disapprovingly.

When Family Guy goes against woke pieties like that, it can feel original again. Increasingly though, the show is lurching along each week with tired jokes and lame lines attacking conservatives and MAGA supporters.

With last night's bizarre episode, Family Guy is getting harder and harder to watch.