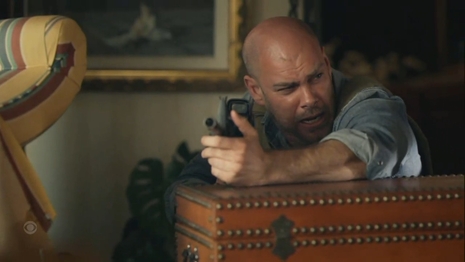 In the world of CBS' S.W.A.T., red flags of a domestic terrorist include anger over high taxes and gas prices, along with concern about property rights.

On Sunday's episode, 'Quandary,' domestic terrorists attempt to kidnap and kill a fictional governor of California.

The S.W.A.T. officers first learn about the threat of these men after stumbling upon a cache of illegal weapons from a ghost gun dealer. The dealer is making automatic rifles with the help of a 3-D printer. (Coincidentally, hostility to ghost guns is also the latest focus of the White House's gun control agenda.)

The terrorists in the episode are all white men and the fictional governor is an Asian female, but white supremacy isn't the go-to source of rage this time around. (Again, probably purely coincidence, but President Joe Biden himself, along with many other on the left, have publicly stated that the most dangerous threat to the U.S. is "terrorism from white supremacy. Is the White House writing scripts and sending them to Hollywood?)

Street: How's your research going on the social media page?

Tan: Oh, it's mainly a forum to complain about gas prices and property rights. Lots of talk of a new California. It's hard to tell how much is bluster, how much is for real.

Tan: Yeah, they want to carve out a new state. As far as I can tell, this utopia will have no taxes, no regulation, free gas and no cops.

Luca: So, let me guess, just a volunteer militia to keep the peace?

Tan: And we already know they have all the weapons they need.

The "no cops" part is an intriguing addition to the list, considering there is a real domestic terrorist organization that has called for the abolition of police. Oddly, the episode never mentions Black Lives Matter (BLM) when discussing anti-cop rhetoric. Is Hollywood now going to pretend that this is a right-wing issue instead?

Major domestic terrorism incidents from the Waukesha massacre to the Brooklyn subway shooting have been committed by men whose social media postings were filled with BLM rhetoric and imagery. In February, BLM even bailed-out a terrorist who attempted to assassinate a mayoral candidate in Louisville, Kentucky.

Yet when creating its latest domestic terrorism episode, the creators of S.W.A.T. decided to run a narrative about white men angry over traditionally conservative issues likes taxes and property rights. Really?

The S.W.A.T. team eventually confronts the leader of the terrorist group as he is holding the governor hostage in her home. He cries out:

I'm sick of people like you thinking you know what I want, that you represent the people, when you're all in the pockets of corporations, raising taxes, ignoring property rights. Ordinary folk are sick of it, so we're making a stand. Forming our own state, governed by the people, for the people, and this is the first step in the battle against tyranny.

After catching these anti-taxation terrorists, the episode ends with the reliably leftist cop Chris (Lina Esco) making a big career change. She decides to leave the force to run a local safehouse for illegal immigrants. Other officers are supportive of her decision.

So, the vicious villains complain about high taxes and property rights while a bleeding-heart liberal heroine leaves law enforcement to help illegal immigrants break the law in California. The episode is the ultimate left-wing fairy tale.