From Thanksgiving to Waukesha: The Liberal Media Censor History 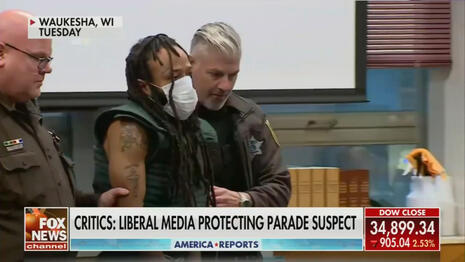 So the latest attempt to censor history and bully Americans into science has unfolded over there on the editorial pages of The Wall Street Journal.

The headline on one notable editorial?

As regular readers of the WSJ opinion pages are long aware, not to mention appreciative of, beginning in 1961, under the leadership of editor Vermont Royster, the WSJ would run Royster’s recounting of the Pilgrims and America’s first Thanksgiving. The Royster piece is exactly as the current editorial describes it: “…a contemporary contrast from the mid-20th century about the progress a prosperous America has made that we can all be thankful for.”

The WSJ correctly notes that the annual re-run of that 1961 editorial is:

…popular with readers, who tell us they appreciate the sentiments about hardship and gratitude during what should be a unifying national holiday. For decades we’ve run them with nary a discouraging word.

This year, but of course, the bullies of left-wing cancel culture have turned the sights of the identity politics mob to demanding an end to this WSJ tradition that celebrates the Pilgrims.

The push comes from Change.org, which has started a petition that, as of print time for the editorial, had gathered 50,000 signatures. Their argument:

The [editorial] includes lines such as, ‘What could they see but a hideous and desolate wilderness, full of Wilde beasts and Wilde men?’ The pilgrim writes that they were separate from ‘all the civil parts of the world.’

The Wampanoag indigenous people saved the colonists from starvation and death, a story that our nation now celebrates as Thanksgiving. But even more than this disturbing lack of gratitude is the notion that there were no civilized people in the Americas. This world view generated centuries of genocidal practices that eliminated 90% of the indigenous population, my ancestors.

On the left-wing petition goes.

As the WSJ says in its current responding editorial, this is a “willful misreading of the editorial, which recounts the bravery and trials of the Pilgrims as they sought a better life in new land.”

What this dust-up is really about, though, is the leftist cancel culture at work. With the leftist media playing along with its silence about yet another episode of the left demanding censorship of ideas they don’t like.

By chance, this episode with the WSJ comes on the heels of the horror at Waukesha, Wisconsin.

After endless months of left-wing media focus on Kyle Rittenhouse, with an uproar over his not guilty verdict, the media quickly goes quiet as it is revealed that the Waukesha Xmas parade killer turned out to be one Darrell Brooks, a Trump-hating black man who is, per The New York Post: “…a career criminal who’s spent more than half his life trapped in a revolving door of incarceration, drug abuse and violence.”

Among Brooks’ crimes: “..abusing his partners, raping and impregnating a teenager and a consistent streak of other violent crimes.”

As my NewsBusters colleague Tim Graham has pointed out: “….some liberal media outlets are energetically attempting to spin away from the suspect Darrell Brooks and his left-wing politics on social media.”

There is, yet again, the leftist playbook at work here. To borrow from Bill Clinton guru James Carville’s 1992 campaign mantra (“It’s the economy, stupid”), what is at play in both the attempt to silence the Wall Street Journal editorial on the Pilgrims, and to quietly walk away from Rittenhouse-style coverage of lefty Darrell Brooks is “It’s the censorship, stupid.”

Whether it is done to shut down a 60 year old editorial in the WSJ, or to tip toe away from Rittenhouse-style coverage of a crazed criminal who has committed mass murder, it is of a piece.

In these two incidents alone the leftist mania to re-write American history or to silence those whose views they cannot abide or just ignore a career criminal who shares their views on Trump, race and who knows what else is, at bottom, about censorship.

The Wall Street Journal’s Gerard Baker has noted correctly that the left’s attack on the American legal system is in reality a demand for “revolutionary justice.” He adds:

If the left’s reaction to this (Rittenhouse) case doesn’t scare you, I’m afraid you don’t understand what it represents, or how rapidly and how far the poison of this subversive and illiberal dogma has already spread through a political movement and ideology we once called liberal.

Indeed. And that “revolutionary justice” is visible in pockets across America - with two examples showing up in the form of the demands to silence that Wall Street Journal editorial on the Pilgrims and another, seemingly unrelated effort in the media, to downplay a mass killing in Waukesha by a crazed career criminal who holds leftist views.

As America heads into the hopefully unifying spirit of the holiday season, it is nonetheless a smart thing to do to understand the reality of the American left in - and out - of the media.