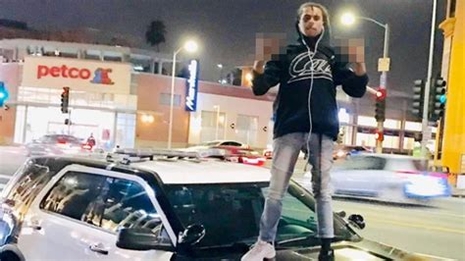 The man who attacked comedian Dave Chappelle Tuesday night at the Netflix Is a Joke Festival in Los Angeles had a "connection" with the transgender community, according to his brother Aaron.

Isaiah Lee, 23, tackled Chappelle on stage Tuesday night while the comedian was doing his stand-up routine. Lee was carrying a fake handgun with a knife blade inside.

On Wednesday, the Los Angeles Police Department (LAPD) arrested Lee for assault with a deadly weapon. He's being held on $30,000 bail.

New details have emerged about Lee since the booking. In an interview with Rolling Stone, Lee's brother Aaron said that controversy surrounding Chappelle's jokes about transgenderism could have been a factor in the attack.

“He does have a connection with the transgender community,” Aaron told Rolling Stone. “He used to stay at a shelter that helps transgender people. He’s been homeless since 11. He came out to California after our grandmother died, and basically was in the streets getting help from different programs in Hollywood, like My Friend’s Place. He went to a lot of different organizations out there that help transgender people. Yeah, it could have definitely been a factor, but I really don’t know.”

"Maybe he missed out on taking his prescription," Aaron said, noting his brother takes psychiatric medication.

However, the landlord of the Redondo Beach, California building where Aaron and Isaiah recently lived noted that both brothers were violent.

“They are criminals,” he told the New York Post. “It’s emblematic on how bad things have gotten in this state.”

Lee rapped under the name “NoName_Trapper” and posted a song online two years ago titled “Dave Chappell.” Accompanying the song was a picture of Lee standing on top of a police car and giving an "up yours" gesture with both hands.

Another rap by Lee is titled "Trump Phone."  In the bizarre rap, Lee sings “On my Trump phone” over and over again before the lines “Said I’m slippin’, I’ve fallen and I can’t get up.”

After the assault, Chappelle joked that a "trans man" attacked him. Chappelle has been a target of cancel culture over the past year for jokes about trans people.

Surprisingly, Netflix has stood by Chappelle despite calls for his cancellation, likely because his shows are very successful on the otherwise struggling streaming service.

“We care deeply about the safety of creators and we strongly defend the right of stand-up comedians to perform on stage without fear of violence,” a Netflix spokesperson said in a statement on Wednesday after the attack.

"As unfortunate and unsettling as the incident was, Chappelle went on with the show. Jamie Foxx and Chris Rock helped calm the crowd with humor," Chappelle's spokesman noted in a statement to the Hollywood Reporter.

After actor Will Smith attacked Chris Rock at the Oscars over a joke about Smith's wife, comedians expressed fears that there would be future such incidents on stage.

The transgender movement has been particularly aggressive in attacking anyone who questions their gender narrative, as everyone from J.K. Rowling to Jordan Peterson can attest.

Whether or not Chappelle's transgender jokes played a role in setting off Lee, acknowledging biological reality has become risky for public figures in 2022.